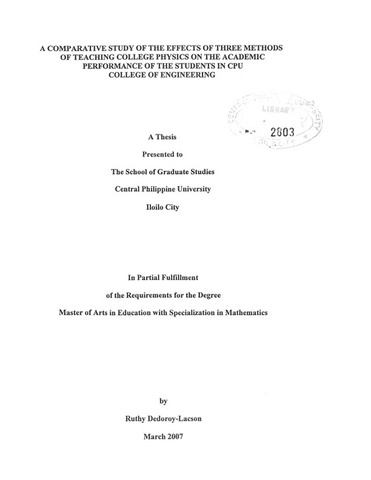 The study compared the effectiveness of three different approaches of teaching college physics namely, traditional - lecture, inquiry teaching approach, and the cooperative learning approach in terms of students’ academic achievement. This study tried to find out whether the use of the three teaching approaches improved students’ academic achievement and identified which method is the best to use in teaching the three topics namely, Magnetism, Electrostatics and Current Electricity. The study was conducted at the College of Engineering, Central Philippine University for second semester CY 2005-2006. Fifteen sophomore students were randomly selected and assigned in each of the three classes. Each group was taught using different teaching approaches for three different topics in physics. The study started with the administrations of the pre - test followed by the intervention and ended with the post - test. For the topic magnetism, cooperative learning method was used for the first group, the inquiry teaching approach for the second group, and the traditional teaching method for the third group. For the topic Electrostatics and Current Electricity, the teaching strategies were changed for each group and so the three groups had been exposed to the three teaching methods for different topics respectively. The instruments used in the study were teacher - made tests designed for each of the three major topics in College Physics 2 (Electricity and Magnetism) namely Magnetism, Electrostatics and Current Electricity. The students’ performances were compared and the significant differences in students’ performance under the three different approaches were compared. Frequency counts, mean scores, and percentages were used for the descriptive analysis. For inferential analysis, the t-test, ANOVA, and Scheffe' test were employed to determine if there were significant differences in the mean performance of students taught using the three different teaching methods for three different topics set at 0.05 alpha level. Before the intervention, results showed that the lecture group scored significantly higher than the inquiry group in Magnetism, the inquiry group performed significantly better than cooperative group in Electrostatics, the lecture group scored significantly better than the cooperative group in Current Electricity. After the intervention, lecture method proved to be significantly better than the cooperative method for the topic Magnetism. For teaching the topics Electrostatics and Current Electricity, not one of the three methods, cooperative, inquiry and lecture was found to be significantly better than the other. All treatment groups, cooperative, inquiry and lecture groups significantly improved their performance after the intervention. For the topic Magnetism, the lecture method results to statistically higher mean gain in students’ performance than the cooperative teaching method, and inquiry method better than the cooperative method. On the other hand, all three teaching methods did not result to statistically significant gains in students’ performance in Electrostatics and Current Electricity. The results of the study suggest that the three different teaching approaches can be used depending on the topic but the lecture method is still the most convenient and effective method in teaching physics.

Master of Arts in Education ( Specialization in Mathematics)