Knowledge, attitude and adherence to property accountability of librarians in state universities and colleges in Panay Island 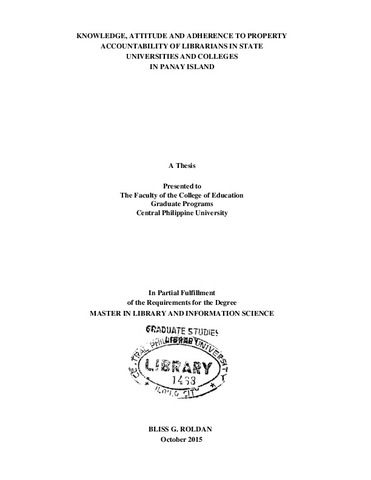 The study was conducted to determine the level of knowledge, attitude and adherence to property accountability of librarians in State Universities and Colleges (SUCs) in Panay Island. Only SUCs recognized by CHED were covered by the study, thus the findings can only be generalized to these institutions. The researcher made use of a self-made questionnaire using the COA Circulars/Memorandums relevant to property accountability, which was validated and tested for reliability. There were 53 SUCs librarians identified through library visit and interview; however, only 49 participated in the study. The study was conducted between March 2015 and April 2015. This research utilized the descriptive-correlational study that made use of the one shot survey design. The instrument used in this study was a researcher made questionnaire anchored on the standards of COA Circular No. 94-012, Documentation on COA Memorandum No. 92-751 and Training Handbook on Property & Supply Management System. After the validation of the research instrument, permission to conduct the study was secured from the Office of the President of the eight SUCs in Panay Island. The data collected were processed using SPSS utilizing frequency count, mean, percentage, weighted mean, and Gamma Coefficient of Correlation. Results revealed that the respondents of this study were middle aged, mostly female, graduate of Bachelor in Library and Information Science course, and were xii already experienced librarians because of their longer length of service in the government. They had average level of knowledge, moderately favorable attitude, and moderate level of adherence to property accountability. Pursuit of higher level of education may guarantee additional knowledge about property accountability since the respondents who have either masters or doctorate degree have significantly higher level of knowledge. Librarian’s attitude is not affected by their personal characteristics. Increased level of knowledge about property accountability is not a guarantee that librarians will have more favorable attitude. Knowing and familiarizing more the COA circulars and memorandums is not a guarantee that librarians will adhere and practice these in their respective libraries. Librarians may have favorable attitude towards compliance of various provisions, however, some of stipulated provisions are hard to comply with because they could sense that these will not be beneficial to them. Hence, favorable attitude is not always a guarantee of their high level of adherence. Librarians favor compliance of the COA circular. However, sustenance or prolonged adherence to a policy is harder if that policy could deter personal welfare and if the after effect will not be favorable to the librarians. Based on the results obtained, the researcher recommends that SUCs librarians should make it their bounded duty and must exert earnest efforts to read, seek advice and update themselves with existing laws, memoranda, and circulars issued by the government involving property accountability. Librarians should be made to understand that “public office is a public trust” it is not just a hollow dictum but a calling that requires utmost dedication. SUCs librarians should make conscientious evaluation of their adherence on property accountability to effect proper management of library resources. SUCs librarians should compare current and best library practices with existing laws, memoranda and circulars and eventually recommend to legislators amendments or provide new provisions in law to enhance practice of librarianship. Librarians as well as faculty members who are new entrants in the government should be given orientation by the institution they serve on property accountability and to include the process in filing for relief of accountability.