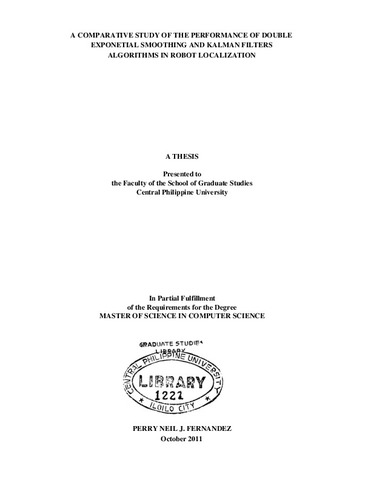 Mobile robot localization is the problem of estimating a robot’s pose (location, orientation) relative to its environment. Real time localization in robot navigation is often implemented using prediction/correction framework. Pose prediction is also known as dead-reckoning which uses incremental optical encoders in kinematic model to update the robot’s location. As a result of this framework, Kalman filtering techniques are widely used in localization. However, one key limitation of Kalman filter algorithms is its computational complexity. The research proposed a simpler Double Exponential Smoothing algorithm and compared this with Kalman Filter in terms of speed of execution and accuracy. A microcontroller-based Global Positioning System (GPS) data logger was mounted in remote controlled (RC) car which was run on three different road types namely concrete, sandy and rocky. Double Exponential Smoothing and Kalman Filter were run one after the other using the GPS data and taking note of their time of execution. GPS data, algorithm results, and speed of RC car were logged in a comma separated values (CSV) file which was stored in a secure data (SD) card. The CSV file was then analyzed offline using analysis of variance (ANOVA) to determine if there was a significance difference between road types in terms of prediction accuracy. The research found out that Double Exponential Smoothing is faster in execution time but less accurate than Kalman Filter in all road types.

Master of Science in Computer Science