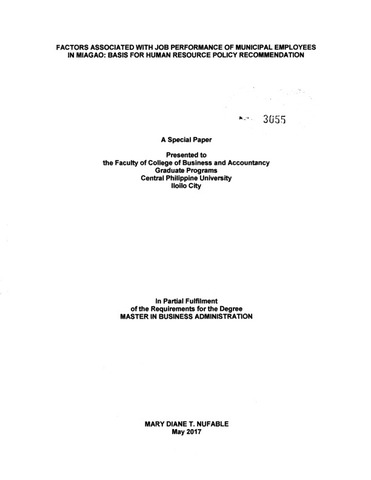 This study was conducted to determine the job performance of municipal employees in Miagao. Specifically, the study determined the personal profile of the respondents as to their age, sex, civil status, job status and years in service and if those characteristics are related to the employees’ job performance. The job performance of employees was examined in terms of task performance which includes job-specific task proficiency and non-job specific task proficiency and contextual performance; written and oral communication, demonstrating effort, maintaining personal discipline, peer and team performance, supervision and leadership and management and administration. It was hypothesized that the employees’ job performance vary according to age, sex, civil status, job status and years in service. This descriptive-relational study used a researcher-made questionnaire. The respondents of the study were 157 employees of the Municipality of Miagao. They were selected using stratified random sampling. Data analysis involved the use of both descriptive and inferential statistics with a .05 level of significance. Findings of this study revealed that majority of the respondents were 41-50 years old, male, married, under career service and has rendered 1-5 years in service. Also, employees in the Municipality of Miagao when taken as a whole have a very satisfactory job performance. Furthermore, employees who were under the career service performed better than employees in the non-career service. Moreover, employees who are 51 years old or above have higher performance compared to employees who were 30 years and below, 31 to 40 years old, and 41-50 years. Also, female employees performed better than males. It is also found that married employees have higher level of performance compared to single and widowed/separated ones. Most of the employees who rendered 16 to 20 years performed better than employees who were in service for 1 to 5 years, 6 to 10 years, 11 to 15 years, 21 to 25 years and 26 to 30 years. Employees performed better in their task performance than contextual performance. Moreover, no significant relationship was found between employees’ job performance and their age, sex, years in service and job status. Also, no significant differences were in the job performance of employees when they are grouped according to their personal related factors. Given these findings, it was concluded that municipal employees are in their mid- 40s, mostly males, majority of them are married, are under permanent status and newly employed. In general, employees had a very satisfactory job performance for the year 2016. Employees who were female, aging 51 years old or above, married, under the career service and have rendered 16 to 25 years in service tend to have a higher level of job performance. Furthermore, municipal employees were effective in tasks that are related in their job description. Also, they performed well in demonstrating effort. However, employees have difficulty in maintaining their personal discipline and written and oral communication. Heads of Offices also need to improve their supervisory, leadership and management skills. Moreover, both males and females; old and young employees; career or non-career; highly, moderately or less experienced employees could have same job performance. Only the civil status of employees was found significantly associated with job performance. This study confirms that all personal characteristics of employees significantly vary with job performance. Based on the findings and conclusions stated, the following recommendations are offered: The Municipality of Miagao should increase its availability of fund for the creation of plantilla positions to provide higher opportunity for career growth to employees who are in the non-career service. Employees who were in his/her five years in service have the lowest ratings in their job performance. It might be on the reason that they still lack the experience and trainings needed. Therefore, it is suggested that the human resource office should provide trainings and seminars to newly-hired or to employees who rendered at least 5 years in service to increase their potential, skills and to be more equipped in their job. Employees ratings have the least performance rating in maintaining personal discipline, which includes their attendance, positivity towards work, management of problems/stress, and others. Therefore, it suggested that the human resource office should develop policies that can lessen the absenteeism and late comings of employees. It is also suggested that there should be seminars on the development of personal well-being like, positivism, stress management, etc. Lastly, it is suggested that human resource office should formulate plans and implement trainings and seminars on written and oral communication.