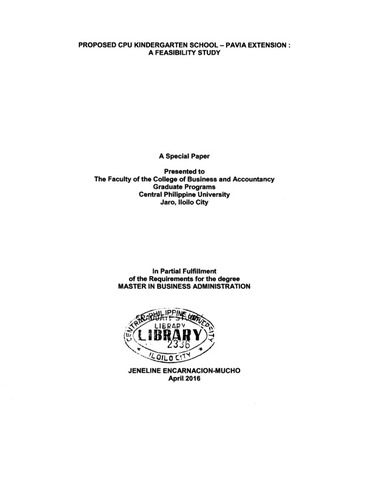 This study was conducted to determine the viability of CPU Kindergarten School-Pavia Extension in terms of its market, organization and management, technical, marketing, legal, financial, social responsibility and risk analysis aspects. Specifically, it aimed to determine the following: market feasibility of CPU Kindergarten School - Pavia Extension; the market potential of the proposed CPU Kindergarten School - Pavia Extension; the profile of the target market; the organic organizational set-up and the corresponding job specifications and description of the various positions, work hours and remuneration package; the availability of local labor force; the facility lay-out, building plan (floor plan, electrical, waterline and power lay-outs); the marketing strategies and marketing mix; the mandatory and statutory requirements needed for starting a business and for its continuous operation; the return on investment, discounted payback period, liquidity, net present value and financial leverage of the project as bases for financial viability; the corresponding tax dues for a kindergarten school as a corporation type of business; the potential risk and risk management options; to present the responsibility of the business to the community and other stakeholders; the operational flow chart which will display sequence of service delivery; and. to prepare a 5-year projected financial statements to show the changes in the financial position, sources and usage of funds as basis for the project’s financial analysis. The descriptive method of research was used. Self-administered questionnaires were utilized to obtain data. The results of the surveys conducted were analyzed using the frequency count and percentages. Current ratio, acid-test ratio, discounted payback period, NPV and financial leverage were also presented to analyze project’s financial viability. Findings According to 78.89 percent of the respondents, there is a need for a new kindergarten school in Pavia, Iloilo. 74.07 percent of the participants have a pre-school children who are currently enrolled, of which 52 percent are enrolled in private school. Majority of the participants who have an enrolled pre-school children has a class size ranging from 11-20 students. 78.85 percent of the participants whose pre-school children are enrolled in private school have an annual tuition fee ranging 10,001-15,000; 6.73 percent are ranging from 5,000-10,000 and 14.42 percent are ranging from 15,001 - 20,000. As of 2015, there are only 10 existing private kindergarten school in Pavia, Iloilo. According to the respondents, CPU Kindergarten School - Pavia Extension should have facilities such as educational toys, security guard, playground, library, television, aircon, cassette /radio and cafeteria. The Net Present Value, Current and Quick Ratios, Payback Period and return on Investment are also computed. The Net Present Value is P73,093.58 , which is positive; therefore, it is acceptable for it indicates good investment. The current and quick ratios signify that the project has the ability to pay its short-term debts. The Discounted Payback Period of investment is 4.89 years. This shows that investment can be recovered in less than five years which is not too long payback period. The average Return on Investment is 17.78 percent on its five years of operation. The annual return on investment is ranging from 12.16 percent on year 1 to 24.30 percent on year 5. Financial Leverage of 1:1 indicates that the capital invested is properly utilized in its operations.