A client-assessment of the service effectiveness of the selected support services at Filamer Christian College, 2003 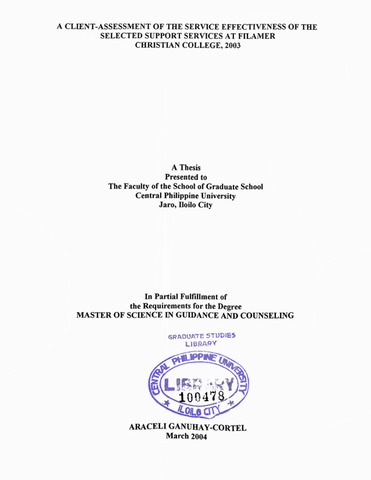 This study investigated the clients’ perception of the effectiveness of the selected support services of Filamer Christian College, namely: business and accounting, guidance and counseling, library, medical/dental, registrar and student affairs services during the school year, 2002-2003. This study determined the extent of utilization, the clients’ level of satisfaction, and effectiveness by office and by measures per office. It studied variation in the clients’ assessment of service effectiveness, extent of utilization, and the clients’ level of satisfaction with the services when the clients were classified according to selected characteristics. Finally, this paper investigated the differences in the clients’ perception of service effectiveness when the clients were classified according to extent of utilization and the clients’ level of satisfaction with each of the support services studied. Self-constructed and validated questionnaires were used to gather data. Effectiveness in service was measured using five selected basic programs and/or services of each of the selected offices, three standard operating procedures, and two summative questions: one for extent of utilization of the services, and the other, the clients' level of satisfaction with the services. The study population included 1,614 tertiary students stratified by curricular programs enrolled, and complete enumeration of 148 full time regular employees of Filamer Christian College below the office of the Vice Presidents. Statistical tools used were mean scores, frequency and percentage distribution for descriptive data. Analysis of Variance (ANOVA), T-test, Chi-square, Cramer’s V and Gamma Coefficients were used to study variations between and among variables. The results showed the majority of the tertiary students were between ages 15- 17 years old, were female, were on their freshmen and sophomore years, were from low-income families, and have one to four dependents. The majority of the employees were 40 years old and younger, female, married, baccalaureate degree holders, were employed at Filamer Christian College for 5-24 years and render academic functions. Less than one half of the employee population have family income between P10,001-P20,000. Close to three-fourths have one to four household dependents (Table 2). Descriptive analysis showed the reach of the six support services between 83 percent and 91 percent of the total population. In “more than twice” category of response by students, extent of utilization of the services ranged between 26.9 percent and 48.5 percent, while that of the employees was between 49.3 percent and 85 percent. The support services most utilized by students were the library and registrar services (48.5 "system in business transaction," and "accuracy in recording and accounting of payments” lowest among the measures. The employees’ personal and work-related characteristics were not significantly related with their perception of the effectiveness of the support services. On the other hand, age, gender, curricular program pursued, length or years of academic residence and family income significantly affected the students’ perception of the effectiveness of the selected support services. Inferred from the results of the study, the following were significant variables which cause variations in extent of utilization, clients’ level of satisfaction, and; perception or assessment of service effectiveness: 1) knowledge of job requirements, 2) amount of rater-ratee contact, 3) desirability of interpersonal relations by the support service personnel, 4) the clients level of satisfaction, 5) psychological and personal characteristics such as. maturity, field of interest, and past experiences with the organization, age and gender of the raters, and 6) socio-economic status of the raters and the economic cost of the services. percent and 43.5 percent respectively), while that by the employees were business and accounting services (85 percent), followed by the library and medical/dental services (83.1 percent each, respectively). The students indicated most satisfaction with guidance and counseling services (40.5 percent) and least satisfaction in the area of the business and accounting services (31 percent). A marked percentage of dissatisfaction was especially noted in business accounting services (24.0 percent), library (23.1 percent) and medical/dental services (21.6 percent). The employees, in contrast, indicated satisfaction with medical/dental and business and accounting services (62.8 percent and 60.1 percent, respectively). The employees’ level of satisfaction with business accounting, guidance and counseling, library, medical/dental, registrar and student affairs were generally higher than that of the students.’ The overall mean for the students’ level of satisfaction was 3.30, interpreted as “satisfactory,” while that of the employees’ was 3.59, “highly satisfactory.” In the assessment of the support services by measures per office, the students rated all 60 measures “effective.” The employees rated four support services “highly effective:” business and accounting (mean= 3.61), library (mean= 3.58), medial/dental (mean= 3.70), and registrar services (mean=3.58), and two offices: guidance and counseling (mean=3.43) and student affairs services (mean=3.53), “effective.” Both groups rated the measure “the office being open during regular school hours” “highly effective.” Both groups also rated “prompt attention to client needs,”