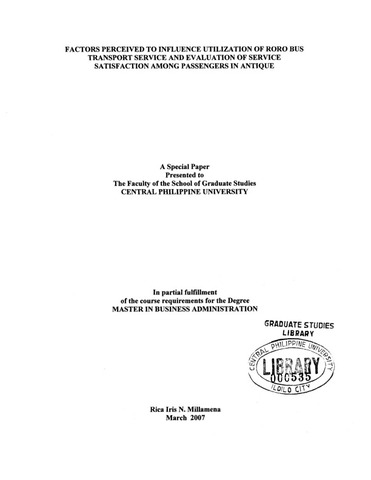 The establishment of RORO Terminal System or Strong Republic Nautical Highway in 2003 elicited a lot of criticisms. Though results to lowering of inter-island transportation cost, several maritime experts expressed that it could actually be more costly in terms of lives. Despite this, in Antique, four bus companies as of January 2007 ventured to provide transportation services for passengers traveling from Manila to Antique and vice versa through RORO Terminal System for a fee. In December 2004, the sole shipping line servicing passengers from San Jose, Antique to Manila twice a week ceased operations and this can be attributed to the rise of RORO bus industry. This study aimed to determine the factors perceived to influence passengers to utilize RORO bus transportation service in Antique and evaluate their service satisfaction. Two types of factors that could possibly assist in creating markets and develop strategies were identified in this study: personal characteristics which include age, sex, civil status, educational attainment, occupation and monthly income; and market stimuli inherent to transportation service which encompass fare, length of travel time, service availability, service accessibility, service reliability, employee responsiveness, service security and service facilities. Results of the study showed that among the aforesaid factors, fare was most cited by passengers to have influenced them to avail of RORO bus service. This was followed by length of travel time, service availability, and employee responsiveness. The least cited among the factors perceived to have influenced utilization of RORO bus were service safety and security and service facilities. Evaluation of RORO bus service satisfaction among passengers in Antique showed that in general, passengers were slightly satisfied with the service. The evaluation also revealed that nearly half of the RORO bus commuters did not feel comfortable with their past commuting experience with RORO bus but a big majority of them intend to avail of the service in the near future.