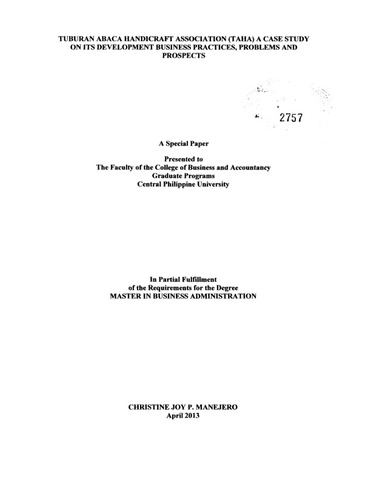 Tuburan Abaca Handicraft Association (TAHA) was established in 2007 with the main objective to develop Abaca (Musa textilis) into fibercraft being the One Town One Product (OTOP) program of the municipality of Janiuay. Despite government interventions and creating Lanot Festival in the said town TAHA has been experiencing low sales and profit. The research study focused on the development of the TAHA, its economic activities and practices, and difficulties that affected to its present position today. In addition, this study tackled issues, constraints, causes of scenario in the associations and its members. This is a descriptive research. Data were gathered using a self- administered questionnaire and focus group discussion. A statistical software (SPSS 11) was used for the analysis of quantitative. Findings of the study show that TAHA is mainly composed of women who finished high school. Majority of them were sugarcane plantation caretakers and married. TAHA pay their members in per piece manner and salaries were given right after the products had been sold. This source out their abaca in other barangay and procure their raw materials by cash. The major cause of rejection of their product was poor workmanship and their top concern was low job order. TAHA caters only to order based consumer and expect payment after delivery. The association does not have a showroom for the products. A major set back of the organization is weak marketing channel. TAHA’s starting capital was composed of ten thousand (Pl0,000) pesos worth of raw materials and three hundred pesos (P300)/person membership fee of twenty six (26) member. They do not utilize loans. The 2012 sales of TAHA was forty four thousand six hundred fifty (P44,650) pesos and its profit of six thousand (P6,000) pesos. Number one (1) concern of members is lack of financial support from TAHA. One management problem is that they have unsold inventory coming from participation on trade shows. In conclusion, not all association members producing products of TAHA. Even though scrunch is considered their top product but only 50 percent of them can produce it. Raw materials in the community cannot sustain the level of production of the organization thus they source out materials. Members lack motivation as well Market of TAHA is limited only to bulk buyers of product. Donation given to TAHA is often in the form of raw materials and equipment but never cash to add up to their working capital. They are affected so much if they maintain an inventory because of limited working capital. Management cannot pay the labor of its members until the products are sold. TAHA has not utilized any credit facility from the government or private institutions. For recommendation, since TAHA’s foremost concern is the lack of working capital, TAHA can apply for financial assistance offered by Department of Trade and Industry (DTI) such as “One Town One Product Credit Facility’ and other financial assistance given by institution such as Development Bank of the Philippines and Land Bank of the Philippines. To address the area of motivation, they can convert the association into a cooperative. In the marketing aspect, DTI has a product and design development agency called Product Development and Design Center of the Philippines (PDDCP) and TAHA can coordinate with the agency to tackle issue on design and quality.