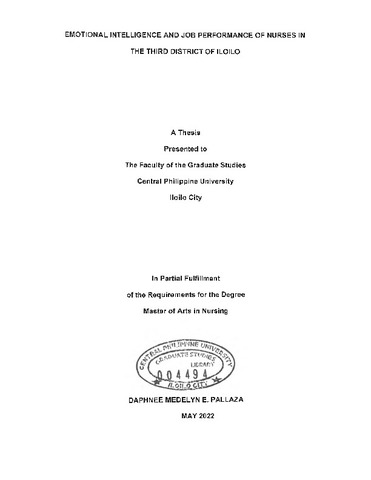 Emotional intelligence has the power to better explain people’s workplace performance. As attributed to the influence of emotional intelligence on each aspect of individuals’ work-life, the high-level possessed emotional intelligence employees are considered as “star performers”. The job performance of nurses may differ from one hospital to another. For instance, there are nurses that are highly competent in all aspect of patient care while there are those nurses perform their job satisfactorily. This descriptive correlational study was conducted to describe the emotional intelligence and job performance of nurses as well as to determine the relationship between variables. There were 120 regular staff nurses in plantilla position that were all working in the hospitals located in the third district of Iloilo for the calendar year 2019-2021. The nurses were asked to answer the research instrument through a Google form that was sent to their verified social media account. Frequency counts, mean score, and percentage were utilized to describe the data while for the relationship of variables: Cramer’s V, Gamma and Pearson’s r were used. The results of this study revealed that majority of the nurses were young adults, average of 34 years old and mostly baccalaureate degree holders. Moreover, the results of this study showed that nursing is still a female-dominated profession, and females are assigned mostly in general ward. A higher percentage of the nurses need to enhance further their emotional intelligence and majority of the nurses have satisfactory job performance. Hypothesis testing showed that there was a relationship between area of assignment and self-confidence, and area of assignment and job performance. The influence of the assigned area of the nurses on their emotional intelligence was evident where their self-confidence increases as they are practicing the skills they have learned. For the job performance, it is observed that when the nurse experiences a good, conducive working environment, s/he is motivated to perform better. Chief nurses, nursing supervisors, and other nursing administrators are encouraged to develop a learning environment to improve their nurses’ emotional intelligence as well as to continue the outstanding performance of their nurses so as to enhance further their other related skills. For staff nurses, it is suggested to have collaborative efforts to comprehend the competence of emotional intelligence that would help one another develop a pattern of behavior in harmony with their colleagues. In essence, it is advocated to have a holistic approach on how to maintain excellent performance and assist everyone in areas that need a much greater improvement.