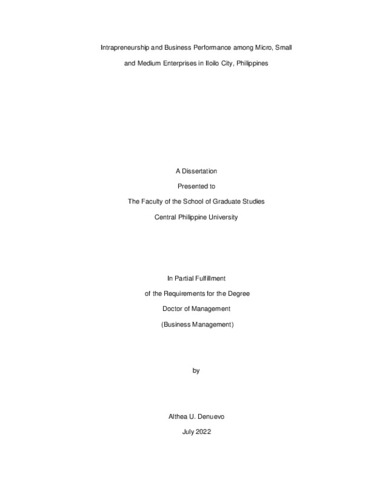 The purpose of this study was to evaluate the intrapreneurship and business performance of micro, small and medium enterprises in Iloilo City, Philippines. Intrapreneurship includes new business venturing, innovativeness, self-renewal and proactiveness dimensions while business performance includes financial and market performance. Survey data were collected from 162 MSME owners and managers from industries namely; manufacturing, wholesale, retail trade and repair services, accommodation/food services, financial and insurance services, and other services. Results confirmed that there was a positive correlation between intrapreneurship and business performance. A significant difference was detected in the level of innovativeness when MSMEs were grouped according to type of business. Majority of the MSMEs were operating between 5 to 14 years and mostly were micro enterprises and sole proprietorship. Marketing and operations activities were very highly practiced by enterprises. Support from other concerned entities was highest-rated in comparison with partnership with academe and government support. The highest mean score for proactiveness indicated a high level of intrapreneurship. Medium enterprises and those in business operation for 45 years and more had very high market performance. Based on the findings of the financial research, MSMEs had favorable financial performance from 2015 to 2019. The strong returns on sales, assets, and equity were indicators that businesses were performing well. Additionally, they were able to pay their present debts due, and assets were mostly financed by owners’ equity rather than liabilities from creditors. The focus group discussion provided more evidence that businesses were viable. Results were presented to MSME owners in order to discuss potential collaboration between governmental agencies, academic institutions, private businesses, and MSMEs. To encourage an intrapreneurship culture within the organization, where creativity and innovation can be fostered for the enhancement of business performance, an efficient and successful intrapreneurship program was recommended.