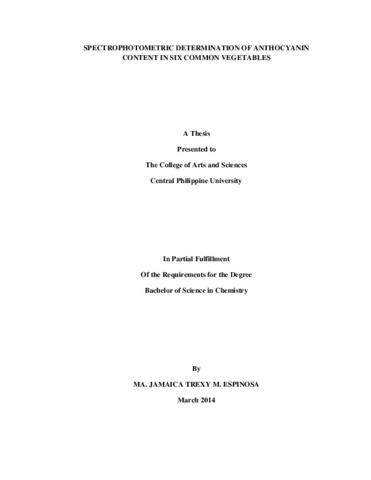 Anthocyanins, the natural colorants that belong to a group of plant compounds called flavonoids, are responsible for most of the red, orange, purple, violet, magenta, and blue colors found in fruits, vegetables, legumes, flowers, and other plants. The six vegetables specifically imparting the red-violet to purple color which are of interest to the researcher are camote (Ipomoea batatas), lupo (Alternanthera sessilis), kolitis (Amaranthus tricolor), kadios (Cajanus cajan), balagay (Psophocarpus tetragonolobus), and sitaw (Vigna sesquipedalis). The objectives of this study were to quantify the total anthocyanin content (TAC) from each particular vegetable’s part which are the leaves, seedpods, and the seeds; and relate them to their anti-oxidant and disease-fighting potentials to benefit humankind. Total anthocyanin content in the methanol extracts were analyzed using the pH differential method. Spectrophotometric quantitation was used at 520 nm and the concentration was expressed as ug/g cyanidin-3-glucoside. Results showed that 4 out of these 6 vegetables have positive values for TAC. Balagay has the least TAC (5.68 ± 0.6), followed by camote tops (6.57 ± 0.3), sitaw (18.2 ± 0.1), and finally kadios having the highest value (50.6 ± 1.1). On the other hand, 2 vegetables were found to have negative values for TAC, lupo (-6.98 ± 0.1) and kolitis (-1.25 ± 0.1), which are suspected to have another type of plant pigment, specifically a betalain. It is recommended that qualitative tests be performed on both plants, to confirm the presence of betalains, and quantify them if proven present; determine the antioxidant properties of each; and identify what specific compound causes this property. It is further recommended to include at least one of the four vegetables in the diet due to its many health benefits, at affordable prices.

Bachelor of Arts in Chemistry