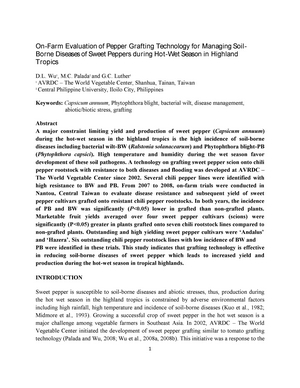 A major constraint limiting yield and production of sweet pepper (Capsicum annuum) during the hot-wet season in the highland tropics is the high incidence of soil-borne diseases including bacterial wilt-BW (Ralstonia solanacearum) and Phytophthora blight-PB (Phytophthora capsici). High temperature and humidity during the wet season favor development of these soil pathogens. A technology on grafting sweet pepper scion onto chili pepper rootstock with resistance to both diseases and flooding was developed at AVRDC – The World Vegetable Center since 2002. Several chili pepper lines were identified with high resistance to BW and PB. From 2007 to 2008, on-farm trials were conducted in Nantou, Central Taiwan to evaluate disease resistance and subsequent yield of sweet pepper cultivars grafted onto resistant chili pepper rootstocks. In both years, the incidence of PB and BW was significantly (P<0.05) lower in grafted than non-grafted plants. Marketable fruit yields averaged over four sweet pepper cultivars (scions) were significantly (P<0.05) greater in plants grafted onto seven chili rootstock lines compared to non-grafted plants. Outstanding and high yielding sweet pepper cultivars were ‘Andalus’ and ‘Hazera’. Six outstanding chili pepper rootstock lines with low incidence of BW and PB were identified in these trials. This study indicates that grafting technology is effective in reducing soil-borne diseases of sweet pepper which leads to increased yield and production during the hot-wet season in tropical highlands.