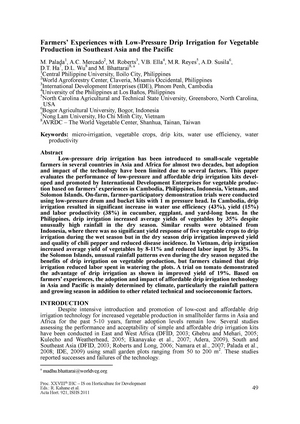 Low-pressure drip irrigation has been introduced to small-scale vegetable farmers in several countries in Asia and Africa for almost two decades, but adoption and impact of the technology have been limited due to several factors. This paper evaluates the performance of low-pressure and affordable drip irrigation kits developed and promoted by International Development Enterprises for vegetable production based on farmers’ experiences in Cambodia, Philippines, Indonesia, Vietnam, and Solomon Islands. On-farm, farmer-participatory demonstration trials were conducted using low-pressure drum and bucket kits with 1 m pressure head. In Cambodia, drip irrigation resulted in significant increase in water use efficiency (43%), yield (15%) and labor productivity (38%) in cucumber, eggplant, and yard-long bean. In the Philippines, drip irrigation increased average yields of vegetables by 35% despite unusually high rainfall in the dry season. Similar results were obtained from Indonesia, where there was no significant yield response of five vegetable crops to drip irrigation during the wet season but in the dry season drip irrigation improved yield and quality of chili pepper and reduced disease incidence. In Vietnam, drip irrigation increased average yield of vegetables by 8-11% and reduced labor input by 33%. In the Solomon Islands, unusual rainfall patterns even during the dry season negated the benefits of drip irrigation on vegetable production, but farmers claimed that drip irrigation reduced labor spent in watering the plots. A trial on tomato demonstrated the advantage of drip irrigation as shown in improved yield of 19%. Based on farmers’ experiences, the adoption and impact of affordable drip irrigation technology in Asia and Pacific is mainly determined by climate, particularly the rainfall pattern and growing season in addition to other related technical and socioeconomic factors.