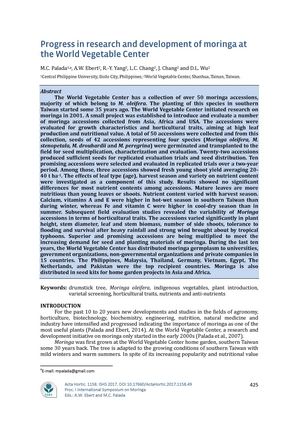 The World Vegetable Center has a collection of over 50 moringa accessions, majority of which belong to M. oleifera. The planting of this species in southern Taiwan started some 35 years ago. The World Vegetable Center initiated research on moringa in 2001. A small project was established to introduce and evaluate a number of moringa accessions collected from Asia, Africa and USA. The accessions were evaluated for growth characteristics and horticultural traits, aiming at high leaf production and nutritional value. A total of 50 accessions were collected and from this collection, seeds of 42 accessions representing four species (Moringa oleifera, M. stenopetala, M. drouhardii and M. peregrina) were germinated and transplanted to the field for seed multiplication, characterization and evaluation. Twenty-two accessions produced sufficient seeds for replicated evaluation trials and seed distribution. Ten promising accessions were selected and evaluated in replicated trials over a two-year period. Among those, three accessions showed fresh young shoot yield averaging 20-40 t ha-1. The effects of leaf type (age), harvest season and variety on nutrient content were investigated as a component of this study. Results showed no significant differences for most nutrient contents among accessions. Mature leaves are more nutritious than young leaves or shoots. Nutrient content varied with harvest season. Calcium, vitamins A and E were higher in hot-wet season in southern Taiwan than during winter, whereas Fe and vitamin C were higher in cool-dry season than in summer. Subsequent field evaluation studies revealed the variability of Moringa accessions in terms of horticultural traits. The accessions varied significantly in plant height, stem diameter, leaf and stem biomass, number of side shoots, tolerance to flooding and survival after heavy rainfall and strong wind brought about by tropical typhoons. Superior and promising accessions are being multiplied to meet the increasing demand for seed and planting materials of moringa. During the last ten years, the World Vegetable Center has distributed moringa germplasm to universities, government organizations, non-governmental organizations and private companies in 15 countries. The Philippines, Malaysia, Thailand, Germany, Vietnam, Egypt, The Netherlands, and Pakistan were the top recipient countries. Moringa is also distributed in seed kits for home garden projects in Asia and Africa.