The confrontation of the Roman Catholic church with the economic and social development in the Philippines in relation to the influence of the socio-theological position of the II Vatican council : Approaches and resources 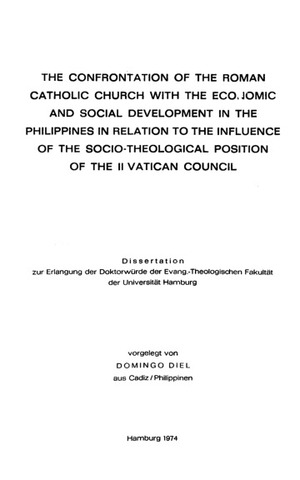 The historic visit of Pope Paul VI to Asia, particularly the Philippines, in November 1970, focused the attention of the Catholic world on the R.C. Church in the Philippines. For her and the majority of Filipino Catholics, it was the "crown" of more than four hundred years of Catholic Christianity in the country: the first visit of a Roman Pontiff to the so-called "only Christian nation" in the Far East. To determine the full impact of this visit is beyond the scope of this study, and besides, the necessary material for it - if any exists - is not available to the writer. The significance of the Papal visit had already been anticipated by various sectors of the Church and society long before the actual visit took place. Generally the expectations for the visit were high, because of the Pan-Asian Bishops' Conference (PABC) which was then taking place (Nov. 23-29) and because of the critical condition of the R.C. Church in the country. The expectations were reflected in the statements made by the Pope himself regarding the purpose of his visit to the Philippines: "to meet the episcopate of the Philippines and that of the countries of that immense part of the world." Thus, the aim of the Pope to have direct contact with the local Churches of Asia (through their bishops) and their particular problems evoked a kind of hope for the Church there, especially for the Church in the Philippines. A typical expression of this expectation was the Pastoral Letter of the Philippine Hierarchy issued shortly before the Papal Visit; in this the Hierarchy described the two-fold significance of the Popes' presence in the country: first, his presence in the PABC was "a sign of unity among the bishops" in the conference and "a sign of unity" with the Pope himself; and secondly, "at a time full of doubt and rebellion ... there is one authority (i.e. the Pope) to whom we can turn with security and follow with peace of soul."

Diel, D. J. , Jr. (1974). The confrontation of the Roman Catholic church with the economic and social development in the Philippines in relation to the influence of the socio-theological position of the II Vatican council : Approaches and resources (Unpublished Doctoral dissertation). Universität Hamburg, Hamburg, Germany.