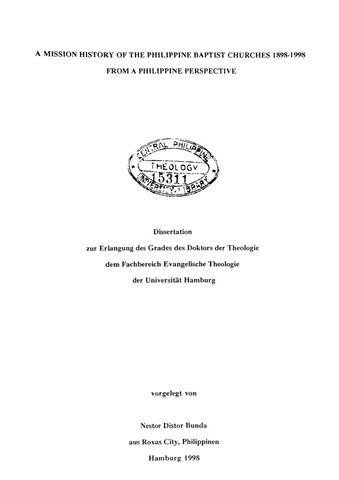 In 1963 Dr. Agustin E. Masa, former General Secretary and President of the Convention of Philippine Baptist Churches (CPBC), in his nine-page Outline History of the Baptists in the Philippines, had endeavored "to set in writing the history of the Baptists in the Philippines" as a response to a "popular request". He emphasized that "without such organized written account of the activities of various Baptist groups in the country, there will be no basis for objective investigation of such activities or no way to assess their advances or lapses." Masa’s attempt to write a Philippine Baptist history was quite similar to what Dr. Feliciano C. Sombito, first President of the CPBC, had indicated earlier in 1936. "Agud mapauswag sing maayo ang aton pinanumbli (sic) dapat naton hibal-an (sic) ang matuud naton nga kahimtangan. Dapat naton usisaon kag suklon ang aton kusug kag kaluyahon. (....) magamitlang sang mga defectos, sa espiritu nga dili pag padiutay apang pagpadaku, dili pagmusmus apang pagbatak, dili paghikay apang sa higugma, kag dili pag patay apang sa pag hatag kabuhi." To develop well our legacy we should know our real situation. We should analyze and assess our strength and weakness. (....) state our defects in the spirit that does not belittle but promote, not to ridicule but to elevate, not to humiliate but to love, and not to slay but to give life." In a way, history serves as a basis to understand and transform the present and a guide to plan for the future. Meditating on religion, politics and social transformation, Philippine Baptist scholar Dr. Lester Edwin J. Ruiz pointed out that "memory, narrative, and vision are decisive for transformation inasmuch as they mediate the possibilities of the 'fundamentally new and better.' Without dreams - indeed, without the capacity to dream - the future is closed; without memory we are cut adrift in the present without any guiding stars to show the way; and without narrative - or the capacity to tell and re-tell our past and future - there is no possibility for meaning. Taken as a triadix structure, past, present, and future provides the context for human life.” The American Baptist missionaries were not unaware of the need to write history. In 1966 Elizabeth Chambers, librarian of the Baptist-owned Central Philippine University, was one of the participants in an Asian-wide conference on theological education attended by Asian church leaders involved in education, together with some theological school leaders from the United States. In that conference, Missionary Russell Brown affirmed that Chambers acknowledged that there are no historical materials available to help the Philippine people to know about their religious origins. Chambers stressed the importance for Protestant denominations to have a sense of their own beginnings in the Philippines and Brown requested the missionaries "to give serious thought to the possibility of the preparation of a Baptist Church History for the Philippines." Not before 1976, however, the delegates to the annual assembly of Philippine Baptist churches had resolved to write a Philippine Baptist history. In succeeding years a number of committees were commissioned to do research and to come out with a written history. In June 1981 another committee was created to facilitate a Baptist historiography. That committee wrote a project proposal, "Historical Education and Research (HEAR)", to come out with a book on the history of the Philippine Baptist Churches. With a budget of 219,000 pesos it was expected to launch the book in 1985.4 In 1984, Dr. Domingo J. Diel, Jr., then CPBC General Secretary, announced that the CPBC would "come out with a Baptist primer, compilation of selected sermons, and selected biographies of selected Baptist pastors."5 The need to write a history cropped up again in 1990. During the 55th CPBC annual assembly, the delegates made two important recommendations: first, that "the Convention of Philippine Baptist Churches asks the Central Philippine University College of Theology to include in its curriculum a subject of theology in the Philippine context." Second, that "the Convention of Philippine Baptist Churches should encourage Filipino Baptist theologians to write books or Baptist Primer taking into account the Philippine setting and culture." Those endeavors, although they were not realized, could be regarded as efforts of Baptists to recognize the need to write a history. This study is an attempt to partly fill in that need.