The native hito: A study on the marketability of native catfish in restaurants in Jaro, Iloilo City 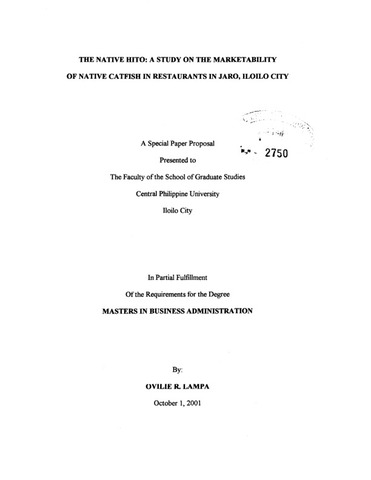 The Asian catfish (clarias macrosephalous) lost its way in the market and waters of Iloilo when the imported catfish was introduced in the country. The most prominent of which was the African catfish, which is currently sold in the market. The provincial government of Iloilo and the Southeast Asian Fisheries Development Center (SEAFDEC) created the Native Catfish Rehabilitation Project to bring the native catfish back to the farms and rivers of Iloilo. The study was conducted to determine the marketability of native catfish in restaurants in Jaro, Iloilo City. The one shot survey was used in the study. A preconstructed questionnaire was given to the participants of the study. The participants were either the manager or owner of the DTI and non-DTI registered restaurants in Jaro. The result of the survey revealed that there is a demand for native catfish in restaurants in Jaro. However, the respondents found the price of the native catfish expensive and may not be affordable for their clients. Recommendations for research in this area of study center on the cost and supply management, including the joint efforts of individuals in bringing back the native hito.