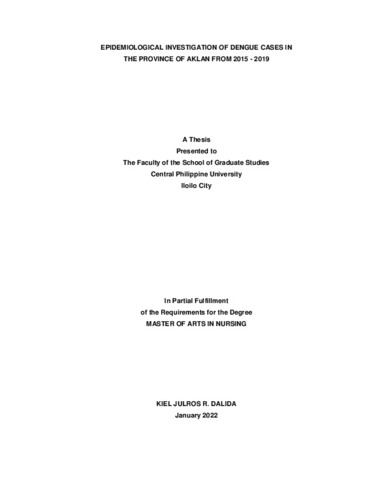 Dengue is a major public health problem in the Philippines and is endemic in all regions of the country. The country's outbreaks are largely seasonal, with most episodes occurring during the wet season (June-November). The provincial government has declared a dengue outbreak in Aklan because of the "alarming increase" in cases in the province. In Aklan alone, the Provincial Health Office reported 2,121 dengue cases from January to July 2019, 157% higher than the 824 cases recorded in the same period of 2018. In 2017, the province recorded only 467 dengue cases from January 1 to July 6. At least 85 barangays in Aklan have clustering cases of dengue. Anchored on the theoretical framework of Epidemiological Triad of Disease Causation, this epidemiological study employed a descriptive-relational-longitudinal design aimed to determine the epidemiological characteristics of dengue cases in Aklan in terms of age, sex, and spatio-temporal pattern. It involved all the confirmed cases of dengue recorded by the Provincial Health Office of Aklan in the past 5 years. It revealed that the year 2019 recorded the highest total number of cases. It is also noteworthy that a massive increase of cases occurred from 2018-2019 with a difference of more than 4000 cases. Based on the results of the 5-year surveillance period, a general rising trend of the frequency of cases and a surge of cases or an outbreak was expected on the third quarter of the year that falls during the rainy season. Younger population was found to be at of higher risk of contracting dengue infection. Males are more at risk than females. There were more cases of dengue in the coastal areas, where the epicenter (Kalibo) is located. Areas near coastal regions are vulnerable to dengue infection. In terms of variable associations, it revealed that the area where the children reside could slightly impact the number of dengue cases among the younger victims of the disease. Lastly, there is not enough evidence that supports the connection between the spatial and temporal pattern of dengue cases in Aklan. The results of this study suggest that transmission of dengue is very focal. The value of early intervention in reducing the medical, social and economic impact of the disease, and the finite resources available for investigation and control should be taken into consideration.