Family planning and its biblical and theological bases 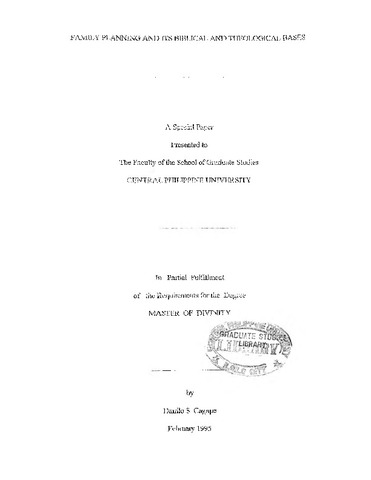 Filipino homes today have an average of eight children. Family planning is strongly endorsed by the United Nations for all countries with high fertility rates. In the Philippines today, the government and some private sectors of society are working hand in hand to encourage and implement the limiting of the number of children in Filipino homes by endorsing the different kinds of birth control methods. Family planning or birth control is defined as a measure used voluntarily by responsible married persons to limit births to those which are desired, and to space them to the best advantage of parents mid the child. What does the Bible say about family planning? What should the attitude of Christian couples be toward it? Unfortunately, there is no direct Biblical reference to guide us concerning family planning, or birth control. It is a matter of individual conscience. But the Scriptures show the general Biblical and theological principles about life, marriage and living, which may guide us in understanding family planning or birth control. Family planning is a vital and controversial issue. Life on planet Earth becomes more difficult as the population grows. The Philippines in particular must contend with a rapid growing population in combination with the slow growing economic growth. Even if the economy will grow at 10% a year (that is overoptimistic), if the population growth remains uncontrolled and unchecked it will take a long time for the condition of the Filipino people to live above the poverty line. Everyone agrees we must do something about slowing down our "baby boom." What must we do precisely? This is the controversial part. There are many considerations in taking this issue, especially in Biblical and theological points of view especially, of the Catholic and Protestants groups, though these groups share a common concern to establish a solid basis for ethical and practical decisions. Beyond these points, Protestants and Catholics take different paths on the question of authority. Protestants are committed to the Scriptures as a dependable and unchanging rule. Roman Catholics give equal weight to the authority of the church and tradition tor the criteria from which contemporary standards are to be derived. Many issues relating to the control of human reproduction are decided by the Roman Catholic Church on the bases of Natural Law. The concept of natural law was most fully formulated by Thomas Aquinas, although it is rooted in a much earlier period of church history. Natural law is derived primarily from pre-Christian Greek philosophy, especially from Aristotle. The concept is thus extra-Biblical in its main development, although work, the family, conscience, and certain other human characteristics are termed "creation ordinances", that is, they are such a constituent part of man's nature that they are recognized even apart from knowledge of Biblical law (cf. Romans 2). The main difference between Protestants and Roman Catholics thoughts in this area has to do with the validity of a law which would bind the conscience with regulations neither implicit or implied and explicit or expressed in the scriptural texts. The Roman Catholic Church opposes all the control except what is known as Natural Family Planning (NFP) methods. On the other hand, the Department of Health wants to push a more vigorous program which makes other methods available as widely as possible. The choice of method is to be left to the individual, as guided by his/her conscience. It is not surprising that there is a clash between these two positions. This special paper is an evangelical contribution to the ongoing discussion, from the Biblical and theological perspectives in relation to the modem science and other fields of discipline. Also included are the Old Testament and New Testament concepts with contemporary considerations from the perspectives of different groups of people as to their positions with regard to the issue. May this paper give guidance to our Evangelical groups as to what position they will take on the controversial and contemporary issues on Family Planning in the Philippine context.