Lukan theology of corporate prayer: An exegesis of Acts 1:12-14 and 6:4 and its implications 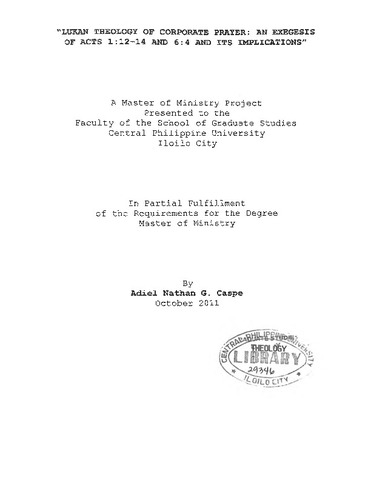 "Prayer" is simply defined as talking to God. It is an offering up of one's desires to God for all things lawful and needful, with humble confidence that he or she shall obtain them through the mediation of the Lord and Savior Jesus Christ. Believers in Christ can pray anywhere, at any time and about anything. They do not have to use special words, close their eyes or put their hands together. The majority of the mighty acts of God after the cross come by corporate prayer. History reveals that God moves in His greatest power when Christians are fervent in united prayer. The mighty acts of God are in Churches where believers practice corporate prayer. These facts indicate that the Church will never have a spiritual turnaround unless Christians rediscover the neglected element of corporate prayer. In the Book of Acts, Luke tells us that something powerful and miracles happen when a church prays corporately. One hundred twenty were gathered in an upper room praying in one accord when Pentecost came (Acts 1:13, 2:1). The group prayed for wisdom in determining Judas' replacement (Acts 1:24). The church cried out to God in one accord for boldness when Peter and John reported the Sanhedrin's threats, and the place where they were was shaken (Acts 4:24,31). They prayed over the seven chosen to serve the widows (Acts 6:6). Peter and John interceded for those who had not received the Holy Spirit and then the Holy Spirit came (Acts 8:15-17). When Peter was in prison, the church fervently pleaded with God for him (Acts 12:5). While the prophets and teachers were praying and fasting, the Holy Spirit called Paul and Barnabas to their first missionary journey (Acts 13:1-2). The church prayed before sending them out (Acts 13:3). Paul and Barnabas committed the new churches to God in prayer (Acts 14:23). Paul and his companions were going to prayer when Paul cast the demon out of the slave girl (Acts 16:16). Paul and Silas prayed and the earthquake happened that resulted to the jailer's conversion and their consequent release (Acts 16:25). Paul prayed with all the Ephesians in his farewell address (Acts 20:36). Finally, they prayed with the disciples from Tyre (Acts 21:5). This is not to deny the role and significance of individual prayer. Ananias was praying alone when he was told to go to Saul (Acts 9:10). Peter was on the rooftop praying when he had his famous vision that led him to Cornelius (Acts 10:9). However, the majority of God's work comes when His people pray together. According to Acts 1:12-14 and Acts 6:4, the church must continue meeting together, searching for God in prayer, keeping the church united through worship, and giving attention to prayer. This study provides a background on how a church nowadays practices prayer, especially corporate prayer, and sustains the passion for prayer. This study is divided into four (4) chapters. Chapter I consists of the introduction which includes background and rationale of the study, objectives of the study, definition of terms, significance of the study and methodology. Chapter II deals with the historical background of the Acts of the Apostles namely; the exegetical study of Acts 1:12-14 and 6:4 on corporate prayer, and the summary of theological concepts about corporate prayer on the above texts. Chapter III consists of the theological implications of corporate prayer in Acts 1:12-14 and 6:4 which includes prayer as basis for unity, prayer as communion and fellowship, prayer as the foundation for every good work, prayer as power, prayer-meeting as an institutionalized activity, and prayer as kenosis. Chapter IV includes the summary of findings, conclusion and recommendations.