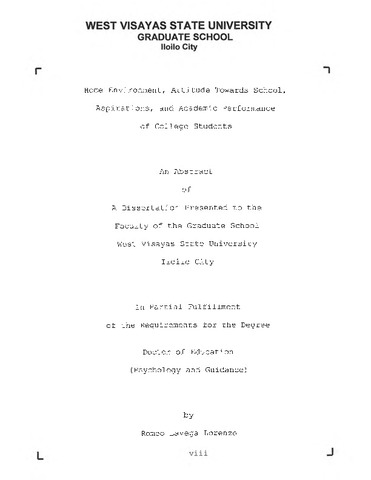 This descriptive-correlational research conducted in the first semester, school year, 2003-2004 aimed at determining the interplay of home environment, attitude towards school, aspiration level, and academic performance of college students of the University of Iloilo. The participants of this research were the 461 college students of the University of Iloilo, who were determined through proportional random sampling. The data were gathered by means of three researcher-made instruments--the Home Environment Survey Form, the Attitude Scale, and the Aspiration Questionnaire. The study employed the mean, the standard deviation, and the frequency count for descriptive data analysis. The t-test, ANOVA, the Pearson's Product Moment Coefficient of Correlation, and the Stepwise Multiple Linear Regression Analysis set at .05 level of significance were used for inferential data analysis. The result of the study showed that the participants had satisfactory academic performance, very supportive home environment, very positive attitude towards school, and high level of aspiration. There were significant differences in their academic performance when grouped according to gender, year level, and college affiliation. Likewise, there was a significant difference in their home environment when grouped according to gender and college affiliation. Moreover, there was a significant difference in their attitude towards school when classified according to gender and college affiliation. For the level of aspiration, significant differences existed when they were grouped according to gender, year level, father's educational attainment, and college affiliation. There was also a positive and significant relationship between home environment and attitude towards school, between home environment and aspiration level, and between attitude towards school and aspiration level. Among the antecedent variables, gender and year level came out as significant predictors of academic performance.

Doctor of Education (Psychology and Guidance)