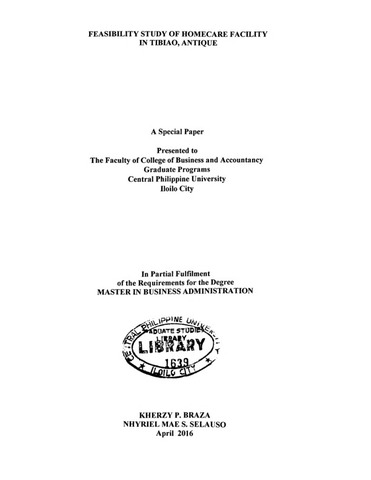 The elderly homecare has grown substantially since the 1990s with an increase in continuing care communities and the growth of new capital sources for all areas of the industry in other countries such as United States of America. The study aimed to provide information to the investors whether the project would be feasible or not. This study determined the viability of the project in market, environmental, socio-economic, and financial aspects. This study was conducted because of the need arising from lack of home care facilities in the region, specifically private homecare. As of 2015, there are 68 known homecare in the Philippines. In Panay, there are three private home cares and two government operated home cares. (Annex A) Management Feasibility Homecare will be managed by an experienced manager from abroad. The prospect manager should have sufficient knowledge and experience in managing home cares according to the proponent. The homecare will employ nurses and caregivers depending on the number of clients. Qualifications of employees are based on Philippine Retirement Authority’s (PRA)s accreditation. Marketing Feasibility The homecare is located where tourist spots are within the vicinity, so clients’ can relax and enjoy nature away from the polluted city. The target market of the business are folks or family members of clients who will be paying the monthly fees and other charges. In Panay, the homecare has only one paid private homecare competitor which is located in Iloilo City. In the Philippines, there are 68 homecare facilities in totality. The target market of this study are the retiring foreigners in the Philippines, specifically in Region 6. Philippine Retirement Authority (PRA) reported that there are 344 retirees in Region 6 during 2013 and 480 retirees during 2014. Hence, there was a 40% increase in number. At a glance in the world, today almost 1 in 10 people are over 60 years old. By 2050,1 in 5 people will be over 60. People aged over 60 will outnumber children aged 0-14 by 2050 (PRA Annual Report). Technical Feasibility The homecare will be located in Tibiao, Antique. The prospect area is near the sea, where retirees can relax and enjoy. The building is bungalow type considering the clients’ condition. The homecare facility is composed of 10 rooms, which can accommodate 10 clients. Each room has its own toilet and bath. The project will cost P9,840,000. Financial Feasibility The two owners of the projects will invest P2,000,000 each. A lot measuring 1,000 square meters which costs P800,000 is included in the investment totaling to P4,800,000 investment. Based on the projected financial statements, the proposed business will result in a Return of Investment of -65% to -63% from years 1 to 5. This project proposal poses a negative Net Present Value of (P28,142,235). Legal Feasibility The project proposal shall comply with the entire legal requirements incidental to its classification as partnership. The owners shall be responsible in processing all legal requisites needed for the business. Taxation Feasibility The income of homecare will be subject to partnership taxation which is 30% of income. It shall also comply with all the requirements and pay necessary expenses of the business. Socio-Economic Desirability The homecare facility will prove beneficial to the owner, to its employees, clients, folks or family members, government and to the future researchers as well. With probable foreign clients, this will also help improve Panay’s tourism. Environmental Aspect Proper waste disposal shall be implemented. Garbage from the clients and the homecare shall be gathered and segregated to be picked-up by paid garbage truck. Medical wastes will be segregated with extra care as it can be harmful and hazardous to the environment and the community. Conclusion and Recommendation The Feasibility Study has now been completed. It has demonstrated that the Homecare in Tibiao, Antique is a viable option for the long-term care of elderly people or retirees in the Philippines. Payback period was not computed due to sustained losses over five years. It has also negative Return on Investment and negative Net Present Value of (P28,142,235) throughout five years. Hence, based on the financial aspect, the project is not feasible. The rest of aspects are possible, therefore, if the investors will weigh the other aspects such as socioeconomic desirability, the project can be pushed through.