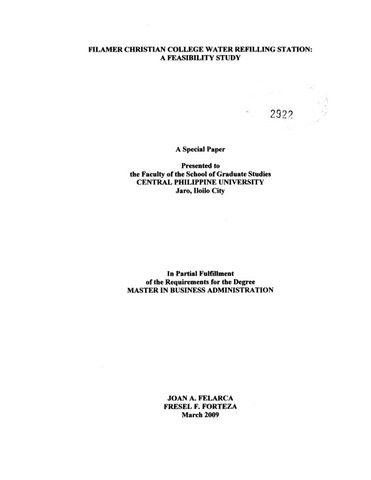 This study was conducted to determine the viability and sustainability of establishing a Water Refilling Station inside the campus of Filamer Christian College, Roxas City. It specifically aims to find out the feasibility of water refilling project in terms of Marketing, Management, Technical, Legal, and Financial Aspect, and to propose an appropriate action to the Filamer Christian College Administration. It also sought to determine the acceptability of the proposed project and the willingness of the target market to patronize the product. This is a descriptive research which involved 357 respondents consisting parents, students, faculty, staff personnel and administrators of Filamer Christian College for school year 2008-2009. A survey questionnaire was used to gather data on acceptability level of the proposed water refilling project. The questionnaire was validated and pretested using 40 pre-test who were not included in the study. The reliability coefficient of 0.9548 showed that the research instrument was reliable. Document analysis was used to obtain the data on students’ enrolment, and the drinking water consumption of faculty and staff in every office from the records of the administration. The data and other information on sales, price and supplier of bottled water inside the campus was taken from the records of the school canteen, while figures on the amount paid by the school to the outside suppliers of purified water for the faculty and staff was taken from the school’s disbursements book. Related facts on the water refilling business were obtained through inquiries made to the owners/managers of water refilling business. The technical part of the study was consulted to the engineers and other knowledgeable persons to determine the appropriate equipment to be used and the design of the building, the possible source or suppliers of raw materials, and the approximate amount needed to put up a water refilling station. While the legal side was confer with the city health officials and other knowledgeable individuals. Findings Result of the survey conducted shows that majority of the students, faculty and staff prefer to drink purified or bottled water than water coming from the school’s faucets when they are inside the campus. Most of them also allotted some amount for drinking water everyday while they are in school. This demand was the basis of our computation of sales, taking into account the total population of the school in 2008-2009. Possible consumers surrounding the school including the clients and employees of Capiz Emmanuel Hospital were also projected as walk-in clients of the project. The proposed FCC water refilling station will be supervised by the IGP Manager under the office of the Vice President for Finance. One (1) cashier/clerk, and one (1) technician/refiller will be hired to work full-time in the station. Compensation of the said personnel will be based on the compensation position scheme (CPS) of the college. All other benefits offered by Filamer to its employees will also be enjoyed by those who will be hired to work in the proposed project. Moreover, two (2) more male work students will be hired as utility boys who will work alternately, one in the morning and one in the afternoon. Regular evaluation will be done to assess the performance of these personnel including the over-all performance of the project. This water station when established will follow the standard processes of water purification using the 20-stages 3000 GPD Reverse Osmosis Water Purifying Unit. This will be strategically located at the FCC main campus facing the Capiz Emanuel Hospital. The lay-out of the water station will conform on the design suggested by the Bureau of Food and Drugs. The raw water will be coming from the public water utility or commonly called NAWASA, and all other supplies needed in the water station will be ordered from the chosen supplier. The source water and the product water will regularly undergo the required water testing as form of monitoring of the local health office. Considered waste in this project will still be water, which can be further used for laundry, watering of plants, washing of cars and for comfort room use. All the agencies involved in the establishment of the proposed water station such as Bureau of Foods and Drugs (BFAD), Department of Health (DOH), the Center for Health Development (CHD), the Local Government Units (LGUs), the Water Quality Association of the Philippines Inc. (WQAP), and the Association of Water Refilling Entrepreneurs (AWARE) will be consulted and their permission will be asked prior to the operation. Business permit will be secured from the City Hall after accomplishing all the needed requirements. The project will also be registered to the Department of Trade and Industry for legal purposes. The project will be financed and managed by the School’s Income Generating Project. When pursued, the project will be a very good source of Other Income of the School since it has a very favorable Net Present Value and it can recover its investment in one (1) year and a half. It has also a very positive cash flow and profit generating capability. The project is financially sustainable and feasible. The project is no longer subject to any taxation under Bureau of Internal Revenue because this will be considered as one of the income generating projects (IGP) of the school, and not a separate entity. Establishing a water refilling station inside the campus of Filamer Christian College will have a positive Socio-Economic Impact on the owner/Filamer Christian College, the pupils, students, parents and faculty and staff, other prospective customers/clients, the employees, the government, the environment, and the future researchers.