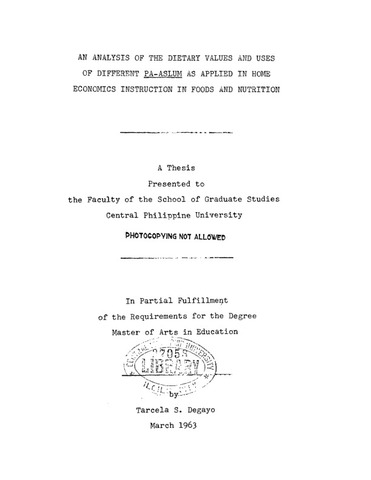 One of the factors that make Oriental cookery famous is the use of condiments. Stanley and Cline define condiments as a group of food accessories which bring out or add to the flavor of food. The most common condiments are salts, sugar, spices, and herbs. Flavor is essential for good nutrition. A British biochemist asserts that condimental substances are "catalysts of nutrition" because of their influence on appetite and on the amount of food consumed. A well-balanced meal contributes nothing to good nutrition unless eaten and taken in the amount that will meet the nutritional requirements of the body. Native Filipino cookery, although very simple, uses some kinds of seasoning; among these are souring agents or pa-aslum. Pa-aslum is a food seasoning that adds a sour flavor to a dish. When properly used, that is, in the right amount and with the right ingredients, it improves the flavor and increases the palatability of a dish. Statement of the problem and the value of the study Pa-aslum has become a part of Ilongo cooking, in fact of Filipino cooking in general, both as a food seasoning and in some native recipes as a basic ingredient. Tomatoes, vinegar, and sua, known as kalamansi among Tagalogs, are commonly used as souring agents. Tomatoes are generally used as pa-aslum in cooking, while the use of vinegar and sua is limited only to a few dishes of meat and fish. Since tomatoes are seasonal, there are months when they are very expensive. There are times when small, sometimes shrivelled, tomatoes would cost two for five centavos. Considering the number of common dishes which require tomatoes, the average expenditure for tomatoes alone would run from twenty to thirty centavos a day. Although tomatoes are generally used in cooking, there are ingredients that do not blend so well with them as with other pa-aslum. For instance in guinata-an, the flavor of coconut milk is enhanced by using more acidic pa-aslum like batuan and iba. Although the use of vinegar in cooking is limited, there are recipes like paksiw, pinamalahan, dinuguan, and pangat which cannot be prepared without a souring agent, usually vinegar. Vinegar is cheap only in places near coconut plantations, but there are areas in the province where it is expensive or unavailable at times. Sua, on the other hand, is popularly known but it is rarely used in cooking. It is best used in its fresh form; the juice is usually added to cooked meat or fish. There are less commonly known plants growing in different areas in Iloilo which can be used as pa-aslum, or as substitutes for sua, tomatoes, or vinegar when these are not available. Between June and December, tomatoes are scarce, but there are other seasonal pa-aslum which will make good tomato substitutes. These plants are not commonly used as pa-aslum either because housewives are not familiar with them or because they do not fully appreciate their use. Their limited use may be due to the fact that they are not usually available in the market. Knowledge of these pa-aslum as substitutes for sua, tomatoes, and vinegar, as well as substitutes for one another would enable the housewives to prepare native recipes when the usual pa-aslum is not available in the home, or in the immediate vicinity, or when a member of the family or a guest is allergic to the commonly used pa-aslum. Sometimes, at the height of the season of a certain pa-aslum, a housewife who does not know its use as a souring agent in certain recipes, goes into expense and much trouble in procuring another less abundant pa-aslum. If the use of these pa-aslum aside from sua, tomatoes, and vinegar is popularized, and wild species extensively propagated and made available in the market, people would learn to use them. If their supply is abundant, prices would be lower. The home garden, especially in the rural areas, is one of the least developed resources of the Philippines. If homemakers are encouraged to cultivate wisely the idle land for food production, family expenditures for food will be decreased and income increased. Among the plants which can be grown easily in the backyard are pa-aslum. These would provide a continuous supply of souring agents for cooking. For example, alumpilan, a perennial vine, can be grown along the fence, hence does not take up garden space. Clearly, there is a need for more knowledge about these pa-aslum--their food values, their acidity, their use in specific Ilongo recipes, and their method of propagation. When housewives know more about the value of these plants, they will use them more often as pa-aslum and as substitutes for tomatoes and other common pa-aslum when these are not available. Producers will, in turn, propagate these plants and their availability to consumers is assured. This study aims to answer the following questions: 1. What plants found in Iloilo would make good pa-a slum? 2. What are their food values? 3. What is the degree of acidity of each of these pa-aslum? 4. In what recipes are they most appropriate? 5. How are these plants propagated? It is hoped that this study will point out important implications both to teaching and to practical homemaking.