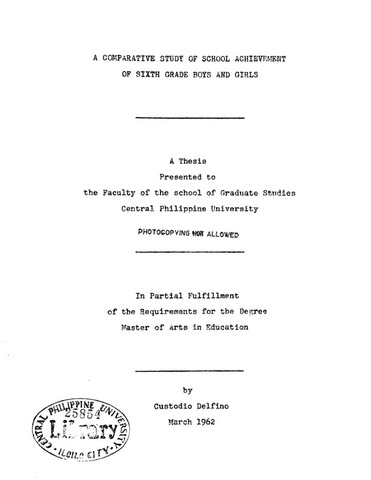 In all Philippine elementary schools, it is customary at the end of the term to name two pupils as the honor pupils of the year. This designation is highly coveted by both pupil and parent. A pupil is considered successful as far as schooling is concerned when he or she is a recipient of this coveted class honor. To be an honor pupil carries with it a high distinction in the school where the pupil attends and in the community where the parents live. Even career men are noted for the honors they achieved in school in the elementary grades, in high school or in college. It is often reported of one or another that "he graduated with honors." An honor in school may have several connotations. It may mean academic brilliancy. It may foretell success in one's choice of profession. It may give power to the recipient in the days to come. It may even insure success in business or politics. It may be a portent of future wealth, fortune, or glory. Honor is defined as a mark of special favor given to a pupil, attached to his name or person. It is a reward that decorates the recipient. An honor student in a Philippine school is one who has accomplished some outstanding scholastic achievement or who has a high general average. It may be possible that some pupils in a class or school may be called honor pupils or honor students. To become an honor pupil, one must be a good reader, accurate in arithmetical computations, and skillful in manual activity. It is always necessary that he have excellent memory and high power of retention. It means, further, that he is good in expressing his ideas orally and equally good in written work. He must be adept at both oral and written examinations. The Service Manual presents the official criteria for selecting the honor pupils.1 The following criteria and relative weight of each are used as the basis for selection: scholarship, six points; character, three points; extra-curricular activities, one point. The ranking in scholarship is to be based on the general averages of the graduating students in the last two years of their schooling. The student with the highest average is ranked first. Statement of the problem In many schools where the investigator had a chance to observe, he has noted that girls generally did better work in school, worked more seriously in the performance of school assignments, seemed to be well-disciplined, and excelled in scholastic achievement. In his many years of experience as an elementary grade teacher and later as a head teacher, particularly in the district of Maasin, Division of Iloilo, he has noted, further, that not a single boy during the last five years was included among the first ten highest in scholastic achievement and not one of them, for that matter, ever achieved the first or second honors for the last ten years. Hence, this situation prompted the researcher to undertake a scientific study on the subject. This investigation was made primarily to find out why elementary school boys do not achieve as much as do the elementary school girls in classroom work. In this connection, the following questions might come up: (1) Are the elementary girls in general more intelligent than the elementary school boys? (2) Are the present classroom practices in the elementary schools more appealing to girls than to the boys? (3) Do the classroom devices which are employed motivate the girls more than the boys? (4) Are the basic and supplementary books in the schools more fitted to the girls than to the boys? (5) Do the elementary school teachers take the pains with the boys that they do with the girls? Any, if not most, of the answers to the foregoing questions might point out or confirm the existence of the problem at issue. Whatever the cause or causes, the investigator is wholeheartedly conscious of the role that boys might play in the future development of the country and all other important positions destined for them. It is, therefore, timely and proper that the general behavior and attitudes of the boys be properly directed and motivated. If they seem to be so unconcerned with their studies as not to improve their scholastic ability as they are supposed to, the boys may fall short of the public expectation as leaders to be. It is noted that the Philippine schools are often disturbed by disciplinary problems, especially among the school boys. If this is so, it may greatly hamper the development of their power of concentration and may hinder the assimilation of desirable skills and knowledge to be imparted by the teachers. If the present undesirable practices may be left unchecked, the chances are that the talent of the boys will be undeveloped if not totally wasted. It has been noted and observed that boys, in general, do not appear to like to exert effort in their assigned tasks and look upon labor as the most degrading legacy that could come to them. It appears that the present youth of the country, whom Rizal fondly called "bella esperanza de la patria mia," seem to have little desire to gain prominence and distinction in the schools of the country. They seem not to appreciate the reward gained through effort nor the pleasure received through fruitful labor.