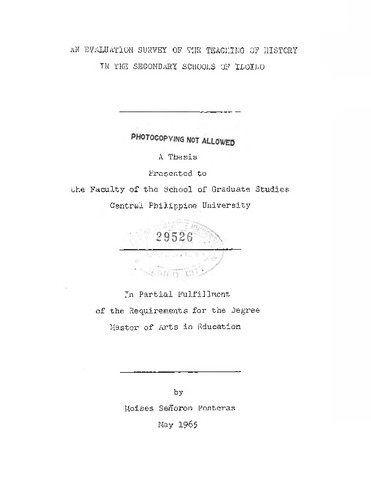 The great role of history in the affairs of man is underscored by Abraham Lincoln when he said: "Fellow-citizens, we cannot escape history. We . . . will be remembered in spite of ourselves. No personal significance or insignificance can spare one or another of us. The fiery trial through which we pass will light us down in honor or dishonor, to the latest generation." These words of the immortal Lincoln truly express the plain truth that man's involvement in history is inevitable. Man makes history, and the history he makes becomes the foundation of his posterity. What is history? It is "the systematic narrative of the civilization and progress of man. It is no mere accumulation of facts and dates, but a living, inspiring story of man and his achievements." It is the unrehearsed drama of people and the events brought about in the process of interrelation with one another. Of what importance is history to man? Through history man understands better the conditions of the present and is enabled to see the future with an assurance of certainty and hope. Moffatt expressed this optimism when he wrote: "In the light of the past the pupil can see the errors that have been made and the possibility of meeting the needs of new conditions. Control of the future is a possibility in the light of the evidence afforded by conflicts, rivalries, and agreements among nations in the past." What is the role of history in the secondary schools? Since history is the oldest of the social sciences, it usually dominates the social science program in the schools. The study of history broadens the outlook of teachers and students toward life. It strengthens nationalism and cultivates world consciousness, thus helping to make the one-world ideal a living reality. Statement of the problem. The results of the government examinations for high-school seniors a few years ago revealed the academic inadequacy of the students for study in college. Former Secretary of Education Jose E. Romero expressed the following opinion on the results of the tests in 1960: On the basis of the medians in percentage in each of the nine subjects, the department believes that there is much to be desired in the improvement of the quality of instruction in secondary schools. The results in Philippine History and World History were among the lowest of the subjects tested. While these results did not point out the definite causes of poor achievement, nevertheless, they cast doubts on the effectiveness of history instruction. The present study was undertaken to investigate the current status of the teaching of history in the secondary schools of Iloilo, both public and private. It was not the purpose of the survey to define the definite causes or to blame teachers and administrators for any ills in the present situation, but to discover the current practices, activities, and problems in the teaching of secondary history.