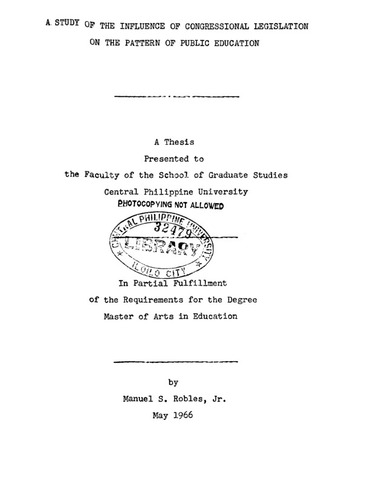 It was the object of the study to provide sufficient understanding of and acquaintance with the different educational laws that have bearing upon the Philippine public school system. It is to be emphasized that the report considers the effect, significance, and influence of these laws on the pattern of public education. It does not in any way explore judicial interpretations of or delve into legal principles underlying these statutory laws. For purposes of this particular report, only laws enacted during the time from the establishment of public schools in the Philippines up to the end of 1965, were included. The sources of data for this report were the official records of the Republic of the Philippines and of the Bureau of Public Schools. These included the Philippine Constitution, the Administrative and Civil Codes of the Philippines, Laws and Resolutions, Official Gazettes, Bureau of Public Schools’ Service Manual, Statistical Bulletins and Reports of the Directors of Public Schools. Other data were drawn from the report of the ICA-NEC Survey of the Public Schools of the Philippines in 1960, Philippine Annotated Laws, American Law Reports, and other law books, magazines, newspapers, periodicals, and other publications. The following steps were followed in conducting the study: 1. A brief historical review of the development of public education in the Philippines was made. This included the program of education during the Spanish times, the American regime, the First Philippine Republic, the Commonwealth, the Japanese Occupation, and the Philippine Republic. 2. The statutory enactments affecting public education were examined and analyzed. The laws were classified in the following areas: organization and administration; financing; personnel; curriculum; students and pupils' welfare; adult education; religious instructions; school boards, offices and commissions with educational responsibilities; textbooks; and development of nationalism and patriotism. Under each of these are various educational laws influencing the development of such particular aspects. These laws were arranged according to dates of enactment. Particular provisions concerning education were discussed and summarized. 3. The subject of politics was presented. Its influence, particularly on the enactment of school laws and generally on the different aspects of education, was discussed. The findings of the study reveal the effect of legislation in two principal directions, as follows: 1. Congressional legislation has extensively influenced the direction of the organizational patterns and programs of public education. The administration, supervision and control of the public schools, and the whole educational system, for that matter, are largely determined by congress through its legislative prerogatives. School laws fix the types of schools to be established, provide sources of school support, regulate the school organization, prescribe the curriculum, designate standards for school buildings, determine the ages of children eligible to attend school, fix the qualifications of teachers, establish salary schedules, prescribe school regulations, fix the school calendar, provide tenure, set the ages of retirement from service, and extend other rights and privileges to school personnel. Most of the school laws are replete with magnanimous provisions but these have not been fully carried out for lack of funds. It was pointed out in the study that educational bills were passed by congress without careful and thorough study of their effects and implications upon education. 2. Certain problems have arisen in the public school system because of political influences and activities. These political considerations affect school fund appropriations and apportionments; the rank and file of school personnel; the position of the Secretary of Education; the Board of National Education; the release of school building funds; and the legislation of educational laws. In view of the findings of the research the following recommendations consistent with the demands of sound educational principles are presented: 1. School officials and teachers should be thoroughly informed of the school laws since many of their duties and responsibilities, as well as their rights and privileges, are set forth and defined in these laws. 2. Congressional legislation of the school curriculum should be discouraged. 3. The Board of National Education which was instituted by Republic Act 1124 of 1954 as the highest advisory and policy-making body in education, should be made more functional by coursing through this Board all educational bills for comment and opinion. 4. The findings of the study conducted by the Board of National Education on Republic Act No. 1881 of 1957, otherwise known as the Spanish Law, which revealed adverse effects upon the college students, should be made as a guide in considering the repeal of the said law. 5. The educational requirements of the Constitution as well as other statutes bearing sound provisions in education, should be implemented. 6. The release of ₱20,000,000 authorized by Republic Act No. 3642 of 1963 of which ₱10,000,000 was included in the 1964 Budget, for the purchase of essential school supplies for free distribution to the pupils in the primary grades throughout the nation, should immediately be effected. 7. The provision of the Educational Act of 1940 as amended by the Elementary School Act of 1953 relative to compulsory attendance, should be unequivocally enforced. 8. The restoration of grade seven as provided for in the Republic Act No. 896, otherwise known as the Elementary School Act of 1953, should be considered and immediately acted upon. 9. The schools should resist political dictations and impositions if they are to achieve their mission of training citizens for responsive and responsible service as members of society. 10. The Code of Ethics for Public School Teachers and Officials should be given a newer dimension and a fresher and fuller meaning among the rank and file of the teaching service. 11. Decentralization of control of public schools should be gradually effected, as this system increases the responsibility of the government and people for the schools and accelerates the democratic self-government. 12. The "pork barrel" system of providing funds for school buildings should be eliminated. A study of improving the method of appropriating funds for educational needs should be made insuring that appropriations are released as soon as they are made available without political considerations entering into the process. 13. Earnest efforts should be made and the best energies should be summoned forth to wage a concerted drive towards effecting an efficient and effective tax collection.