The impact of family planning on women's lives: The research process in the Philippines 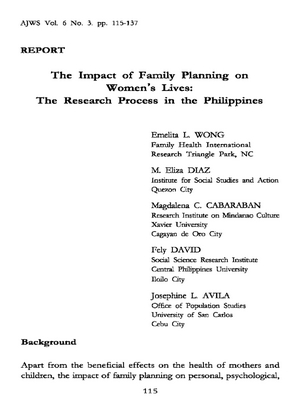 A framework developed for the overall project traces the linkages between family planning services, the use or non-use of contraceptives, and women's childbearing experience. Their subsequent effect is assessed at three levels of women's lives: the individual; family and household; and community and society (Hardee, et al., 1999). At the individual level, contraceptive use and the experience of childbearing may affect a woman's psychological and physical well being. At the household level, the impact may be on women's relations with their partners and immediate kin, or on responsibilities other than childbearing. Further, at the community level, the adoption of family planning may affect women's ability to participate in community activities and the political/election process. The project framework views the impact of contraceptive use on women's lives within the context of gender norms and the sociopolitical environment. Moreover, the framework acknowledges that such impact may vary as women move through different life stages and also owing to their personal, household, and community characteristics. The FHI technical monitors solicited proposals from researchers in academic institutions and women's advocacy groups outside of Manila. Two proposals were selected for implementation: one from the Social Science Research Institute (SSRI) of the Central Philippines University in Iloilo City and another from the Research Institute for Mindanao Culture (RIMCU) of the Xavier University in Cagayan de Oro City. Researchers from the Office of Population Studies (OPS) in University of San Carlos in Cebu City implemented the third project as part of their collaboration with researchers from the University of North Carolina at Chapel Hill in the United States. All of the in-country principal investigators have a strong association with women's advocacy groups. Two principal investigators are members of women's advocacy groups; an OPS investigator is a member of Filipina, a national women's advocacy group; and one RIMCU investigator is a member of the Women's Forum of Region X, a professional and laywomen's group that addresses concerns such as adolescent health and street children. The SSRI team implemented its project jointly with the Iloilo chapter of the Family Planning Organization of the Philippines and Women's Resource Center (WRC), which is a university-based women's center that provides shelter, counseling, and legal assistance to women in need. Information dissemination on the WSP subprojects was started right at the inception. The Institute for Social Studies Action (ISSA), the Philippines' WSP secretariat, published a newsletter documenting various project activities and related issues. This newsletter was distributed to members of the triangle: family planning policy-makers and program managers, women's advocacy groups, and academic researchers in the Philippines. Each of the principal investigators undertook separate information dissemination activities for varied types of audiences. Academic researchers and family planning policy-makers and program managers comprised the traditional audience, while study respondents, officials of local governmental units, and women's advocacy groups constituted the non-traditional audience. The WSP researchers adopted different ways of information dissemination to reach these varied audiences. Both RIMCU and SSRI distributed abstracts in academic symposia and lectures. The RIMCU project team conducted a question-and-answer forum attended by study participants and local governmental leaders. As RIMCU and SSRI researchers worked closely with women's groups in their study areas, they presented findings in meetings of the women's groups. Since both institutions are based in universities, the researchers also disseminated WSP results in classes where women's concerns and gender issues are part of the curriculum.