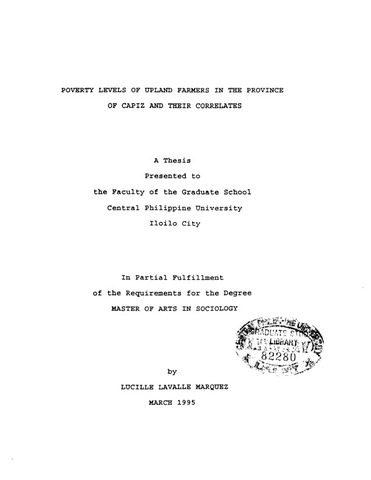 This study was conducted in four municipalities in the Province of Capiz, namely: Cuartero, Tapaz, Jamindan and Dumarao. Its objectives were as follows: (1) to ascertain the demographic-economic characteristics of upland farmers in Capiz in order to determine the level of poverty; (2) to determine the relationship between socio-demographic economic characteristics of respondents and levels of poverty; (3) to determine the relationship between farming practices and levels of poverty; (4) to identify the loaning practices and activities other than farming in which the upland farmers in Capiz are engaged; (5) to identify the strategies/coping mechanisms adopted by upland farmers for survival; (6) to determine the level of aspiration of upland farmers and their plans/ways of realizing them; and (7) to identify the problems related to farming of upland farmers. A sampling formula by Lynch et. al. was used to determine a sample size. A total of 160 upland farmers were the respondents of this study. Sample units were drawn using systematic random sampling. Data gathered with the use of a structured interview schedule were submitted to a computer analyst for computerization and analysis. Descriptive measures used were frequency distribution, percentage, mean and median. Stepwise regression was used to show relationship between variables. The study found out that the average age of respondents was 42.94 years. Most were males, married, had attained intermediate level of education, had 5-8 children and an average household size of 7. Upland farming was the major occupation. Median annual gross income was 516,337.50. Average farm size was 1.48 hectares. Most respondents were non-owners. The majority of the respondents had temporary houses, used open pit toilets and kerosene lamp. Open well was the common source of water. Wood/charcoal was commonly used in cooking. Most had radios and dining tables. These indicators revealed that most of the respondents were in the high level of poverty. Most were engaged in palay production having 2 croppings a year. Plowing was done 1-2 times before planting, applied 1-2 bags of fertilizer 1-2 times/cropping/ha. More than three fourths of the respondents borrowed money. Private money lenders who charged interest rate of 10 percent/month were the common source. They did not require collaterals of those who want to avail of a loan. Payment was done quarterly. As to strategies for survival coping mechanisms with economic needs, more than half of the respondents reported that they sought the assistance of relatives for loans. The help of the parents was sought on non-economic needs such as jobs/recommendation for jobs and advice. Other strategies for survival mentioned were: limiting the number of meals a day or reducing the amount of food intake, working as laborer, sell livestock and poultry, children are hired as house helpers. Most of the respondents aspired to have their children attain college education, to be known in the barangay and to acquire farm land within the next five years. It was found that in spite of their present life conditions which put them on a high level of poverty, the majority had moderate level of aspiration which implies that the respondents are still hoping to acquire farm lands, farm equipment, better housing, appliances and furniture in the future To realize these aspirations the respondents planned to work harder, raise more poultry and livestock, and send their children to college. Farm tenure, number of croppings, number of sacks of fertilizer used, membership in organizations and kinds of crops raised were found to be significantly related to poverty. The most frequent problems in upland farming were: lack of money for farming operations, attacks of pests and diseases, absence of technicians, and unavailability of agricultural equipment.