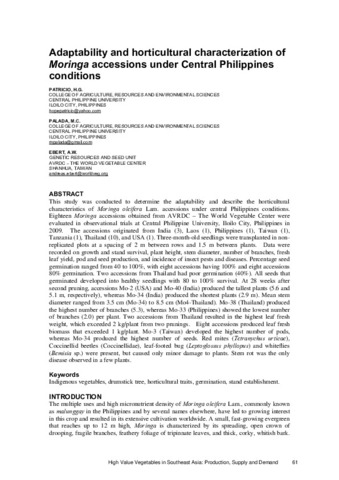 This study was conducted to determine the adaptability and describe the horticultural characteristics of Moringa oleifera Lam. accessions under central Philippines conditions. Eighteen Moringa accessions obtained from AVRDC – The World Vegetable Center were evaluated in observational trials at Central Philippine University, Iloilo City, Philippines in 2009. The accessions originated from India (3), Laos (1), Philippines (1), Taiwan (1), Tanzania (1), Thailand (10), and USA (1). Three-month-old seedlings were transplanted in nonreplicated plots at a spacing of 2 m between rows and 1.5 m between plants. Data were recorded on growth and stand survival, plant height, stem diameter, number of branches, fresh leaf yield, pod and seed production, and incidence of insect pests and diseases. Percentage seed germination ranged from 40 to 100%, with eight accessions having 100% and eight accessions 80% germination. Two accessions from Thailand had poor germination (40%). All seeds that germinated developed into healthy seedlings with 80 to 100% survival. At 28 weeks after second pruning, accessions Mo-2 (USA) and Mo-40 (India) produced the tallest plants (5.6 and 5.1 m, respectively), whereas Mo-34 (India) produced the shortest plants (2.9 m). Mean stem diameter ranged from 3.5 cm (Mo-34) to 8.5 cm (Mo4-Thailand). Mo-38 (Thailand) produced the highest number of branches (5.3), whereas Mo-33 (Philippines) showed the lowest number of branches (2.0) per plant. Two accessions from Thailand resulted in the highest leaf fresh weight, which exceeded 2 kg/plant from two prunings. Eight accessions produced leaf fresh biomass that exceeded 1 kg/plant. Mo-3 (Taiwan) developed the highest number of pods, whereas Mo-34 produced the highest number of seeds. Red mites (Tetranychus urticae), Coccinellid beetles (Coccinellidae), leaf-footed bug (Leptoglossus phyllopus) and whiteflies (Bemisia sp.) were present, but caused only minor damage to plants. Stem rot was the only disease observed in a few plants.

Except where otherwise noted, this item's license is described as Attribution 3.0 Philippines