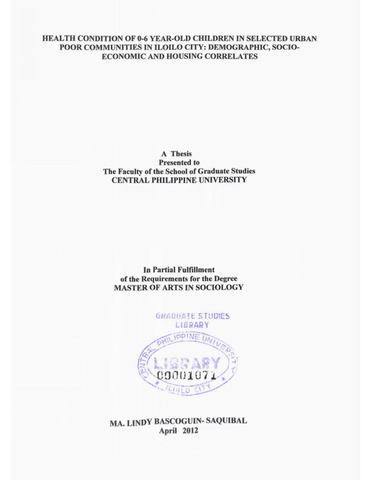 The study was conducted to determine the demographic, socio-economic and housing characteristics and the health condition of children 0-6 year -olds in selected urban poor communities in Iloilo City. It also aimed to determine the relationship between demographic, socio-economic and housing characteristics and health condition of the respondents. A secondary analysis was done from the data file of the survey conducted by CPU-SSRI and PPC entitled “Socio-economic and Public Health Survey in Nineteen Barangays in the Vicinity of the Diesel and Coal-Fired Power Plant in Iloilo City”. Based on poverty incidence, the area of study were the five purposively selected poorest barangays of La Paz - Aguinaldo, Ticud, Ingore, Loboc and Hinactacan. This research study employed a descriptive- relational analysis mainly using frequency distribution and inferential method of analyzing data. Major Findings of the Study A little less than half of the households have a range of income from Php 5.000 to Php 10,000. Two thirds of the respondents have five members in a household, nine out of ten have working household heads while only a third of the respondents’ mothers are gainfully working. Two out of three respondents used permanent materials for their floors while about a percent still lived in dwellings with bare sand as floors. The average floor area of the dwelling place of the respondents is 31.8 square meters. More than half of the houses where the respondents live have one bedroom, and more than a third share this bedroom with three to four members. Almost half of the respondents buy the water that they drink from refilling stations in nearby neighborhood. There were members of the study population that have unapproved sources of water for drinking, getting water from covered well. Almost all the households have toilets but not all of them have a sanitary type, while almost a percent have no access to sanitary toilet. There were those who have undetermined means of disposing excreta and may defecate elsewhere. Only about a fourth has unsanitary toilet type. A little less than half of the respondents dispose their garbage by garbage collection, there were still a proportion of the study population who have unsanitary garbage disposal practices by throwing their garbage either along the riverbanks, near the shore or in any place. More than a third of the respondents became sick, and a big majority had been sick once in twelve months. Influenza is the highest in rank as to morbidity. For those who became sick, more than half of the respondents who became sick utilized health resources and nine out of ten of them consulted either in the district health center or the barangay health station.