The credit card syndrome: Nature and extent of exposure among bank employees in Iloilo City 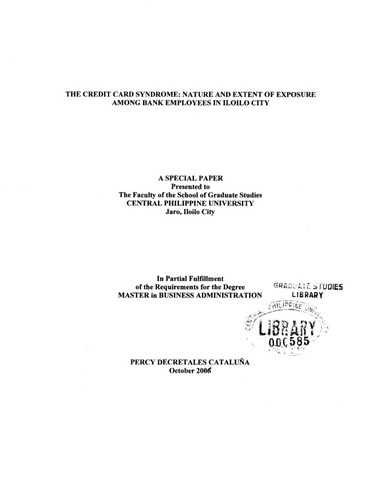 Credit card exposure is common to most, if not all bank employees in Iloilo City. Since the introduction of this financial service, bank employees were amongst the first to avail of it. It has since become a prerogative for every individual. It has become a way of life in the banking industry. The issue of credit card exposure has been studied among many industries. In the US, a Concurrent Resolution passed in May 1999, by the 47th Oklahoma State Legislature, called for Oklahoma’s public colleges and universities to include consumer credit education programs as a part of new student orientation. The resolution indicates that, given the extent to which credit cards are now easily available to students, more college students appear to have significant financial debt (Synovate Public Sector Research Group, 2004). In the Philippines, however, studies on these issues are still limited because of the predominance of unregistered or what we commonly called “underground” economies. In the US, credit card is a very basic necessity. Most of the routine transactions use credit card facility for convenience and safety. In the Philippines, credit card exposure is still on its younger stage. Due also to economic reasons, much of the transactions here are still being paid in cash. Credit card facility is available only to a few who can afford it and are qualified to possess it. The primary objectives of this research was to determine the characteristics of the respondents; the nature and extent of card exposure; and whether the nature and extent of credit card exposure vary according to the characteristics of bank employees in Iloilo City. Data were randomly selected from 88 respondents using a self-administered questionnaire. Data processing utilized the useful tools provided by the Statistical Package Software System or S.P.S.S. Findings showed that the majority of the respondents were female aging from 20 to 25 and with two children on the average. Most of the respondents have two to five years average with the company they were working for. Most of the respondents own one or two credit cards. These cards were obtained mostly as a matter of company policy - a privilege. Majority also possess Visa or Mastercard only. Within this spectrum, credit card limits do not exceed 50, 000 pesos. Credit card exposure has indeed significant influence on the spending habits of the respondents as manifested by their frequent use of its facility to acquire goods or services. Most of the items bought include both basic and luxury goods and services. However, the problem arose when the cards were used indiscriminately, as credit card debts are starting to arise to levels that are not manageable anymore. Although the study indicated that the subjects have not yet reached that level, the researcher recommends that these issues should be considered seriously. These findings, however, are limited to small sector. Hence, the result of the research may not be indicative of the case of credit cardholders from other industries aside from banking.