A study of common Hiligaynon patterns as an approach to English 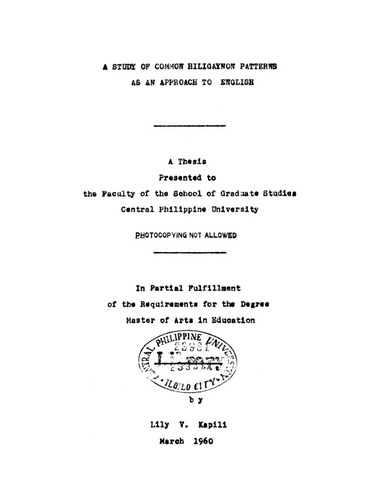 The history of foreign-language teaching displays so many interesting and different styles of methods and approaches that a language teacher often finds himself lost in a forest of techniques. Henry Sweet, the leading authority of foreign-language teaching in England, summed up this situation as follows: In the present multiplicity of methods and textbooks it is absolutely necessary for real and permanent progress that we should come to some sort of agreement on general principles. Until this is attained—until everyone recognizes that no method can be a sound one which does not fulfill certain definite conditions— the public will continue to run after one method after the other only to return disappointed to the old routine. In recent years there has come a "new approach" in language teaching which is sound because it fulfills certain general principles and certain definite conditions. World War II started a series of scientific discoveries about foreign-language teaching and "no teacher has a right to disregard these discoveries." Language teachers should not teach any foreign language by instinct. Teachers in general, and language teachers in particular, are artists and as such they must be concerned about the theories that lie behind their practice. They cannot afford to just "wait out" until this "new fad fades away." In order that present-day materials in the teaching of English as a second language could be effective, the language teachers must understand the principles upon which these materials are based and the implications of these principles for teaching method. Statement of the problem. Results of this "new approach" or "linguistic approach" in the teaching of English as revealed in countries like Puerto Rico, India, Singapore, Afghanistan, Australia, and Latin American countries have shown superiority over the results of the traditional or conventional method. Although it is too early to make definitive conclusions in the Philippines, the evidence is that in Manila, the spoken English of students has improved since this approach was introduced. This new method of teaching English, however, has one basic need — the need of an adequate descriptive analysis of the native language of the learner—before it can work proficiently and effectively. The fundamental assumption guiding the preparation of teaching materials at the English Language Institute of the University of Michigan is given by Fries: "The most effective materials are those that are based upon a scientific description of the language to be learned, carefully compared with a parallel description of the native language of the learner The "new approach" of teaching English as a second language to Filipinos, therefore, requires an adequate descriptive analysis of the native languages in the Philippines on which to build satisfactory materials for learning and teaching. Without this descriptive analysis, several questions—questions which need be answered in language teaching—cannot be answered. Some of these questions which have to be answered before any effective teaching materials could be prepared are these: a. What are the possible trouble spots to be expected? b. What patterns will cause difficulty in learning and what patterns will not cause difficulty in learning? c. What significant differences exist in sounds and structure between the language to be learned and the native language of the learner? d. What is the best approach to overcome these problems? e. What specific exercises are to be practiced and how are they to be ordered in proper sequence? f. What are the items to be stressed in the drill materials? Before any such questions can be answered, before any teaching materials, tests, and language learning experiments can be prepared, there should be a descriptive analysis of the native language of the learner. Not until this is done can there be any basis for comparison. The fundamental feature of the "new approach" is not, therefore, fewer students to teach or longer hours of oral practice, although these are necessary in language teaching, but knowing the special problems that come out of the learner's effort to overcome the different native language habits and develop a new set of language habits Imposed by the foreign language to be learned. Individuals tend to transfer the forms and meanings, and the distribution of forms and meaning of their native language and culture to the foreign language and culture —both productively when attempting to speak the language and to act in the culture, and receptively when attempting to grasp and understand the language and the cultures practiced by natives. The validity of all these assumptions are not just beliefs and hearsay, but are the results of the work of linguists who have studied the effect of close contact between languages in bilingual situations. These linguists report that many linguistic distortions heard among bilinguals correspond to describable differences in the languages involved. Real progress in language teaching can be made only when these basic principles become a part of the language learning research. One interesting fact about the Philippines is that the number of her different dialects exceeds the number of her islands. With this "babelization" of the country, the need for an intensive research study on the different native dialects is intensified. Language teachers in the Philippines would still find themselves lost in the jungle of methods in spite of the "new approach" if this fundamental step in second language teaching were not taken. Textbooks, teaching materials, tests, procedures to follow will still be found wanting in many respects.