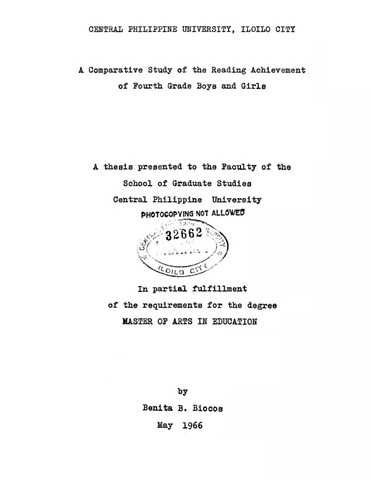 This study aimed to find out in what particular reading skills boys are better than girls, or vice versa; in what particular reading skill each sex is weakest; and in what skill each sex has acquired mastery. The purpose of this investigation, in short, was to find out the comparative abilities and achievements of boys and girls. To accomplish the research, the investigator made the study of the boys' and girls' ratings in English for four school years from 1961-1964. The means, the standard deviations, the standard error of the means, and certain t-ratios were computed. The results served as a basis for comparing boys and girls in achievement English. The investigator administered the Otis Quick Scoring Mental Ability Test to 227 boys and 229 girls. The results served as a basis for comparing the I.Q.'s of the boys and the girls. The next test administered was the teacher-made reading test for 1961-62 given as a diagnostic test to 227 boys and 229 girls of the District of Barotac Nuevo. Before the closing of school a standardized reading test was administered to 122 boys and 139 girls. The result for each subtest of this standardized test served as a basis for comparing the boys and girls in particular reading abilities. To find out the boys' and the girls' preferences in reading, a questionnaire was sent to 250 boys and 274 girls. Three hundred twenty-four boys and girls revealed their interest in reading when they even wrote a composition on one of two topics about reading. At the end of the school year 1965-64 the pupils were given an achievement test in reading. The investigator gathered data about the test results to serve as a basis for comparing reading achievements. Again, at the end of the school year 1965-64 the investigator made a study of the records of attendance of 274 boys and 250 girls for the purpose of finding out what correlation attendance has with achievement in reading. Three important findings were reported. First, as a whole, the boys and the girls under study were almost equal in their native capacities. The girls were as bright as the boys. Second, the boys and the girls were almost equal in their reading abilities. Third, it was only in reading achievement where the boys and girls were different. Girls excelled in reading irrespective of attendance, economic background or native ability. Other findings interesting to note are the following; Although a majority of boys preferred reading more than anything else, girls showing the same preferences exceeded the boys in number. The average fourth-grade Filipino pupils were retarded by about a year when compared with their American counterpart. Among those who like to read, it seemed the girls read just because they liked to read while the boys read because they wanted to gain information. The following are the reading skills in which the pupils were weak: ability to follow directions, skill to look for references, skill to look for meaning of opposites, skill in interpreting of material, and skill in recognizing word form. In the following skills girls are relatively better than the boys: interpreting of material, knowing the meaning of opposites, recognizing word form, following directions, and looking up references.