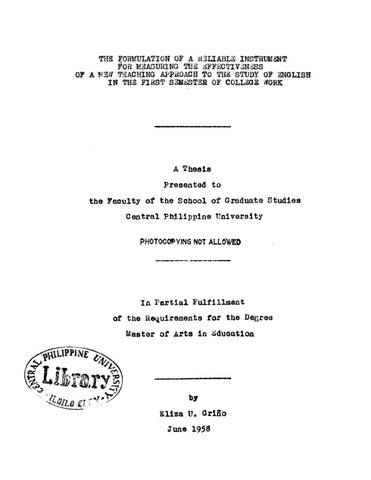 Whatever happens in the lower grades concerning the language of instruction in the Philippines, in college work English is difficult to replace. No better reason can be advanced than the fact that the language has proved universally useful. There is hardly an invention or a philosophy that has influenced the living of the people of the world which has not been recorded in English. Much of the cultures of the world has been preserved and interpreted in the language. Much of the world's commerce is transacted in the language. Although the rise of nationalism in the country has manifested itself in the adoption of an indigenous national language, no bill has ever been passed, nor is there a bill in the present agenda of the Philippine Congress, to the effect that the courses offered in basic English be reduced or gradually eliminated. On the contrary, the popular demand seems to be for the increase of basic requirements in English courses. Therefore, the continual application of teacher effort to the study of how best to teach English so as to render it a handier working tool is never wasted effort. Anybody who has any concern for the education of the young has expressed dissatisfaction, even depression, at the evident ineptness in communication of the generations of students since 1945—a sorry state which is commonly believed to be at the root of general education’s down-grade tendency. For some years now, either the national association of teachers of English 2 or some of its auxiliaries have held annual conferences in a serious effort to improve instruction in the language. Fulbright professors have been sent over to help in the project. Recently the Rockefeller Foundation has lent a generous helping hand by offering to found an institute for research in the field. The warm response to the conference of teachers of English initiated by Central Philippine University this year (1958) is another case in point. For this school, the problem is brought home by the constant request of deans that the standard of achievement in the study of the language be raised even at the risk of high "mortality." This request gains more weight when set beside the fact that private schools, which must live on their income from student fees, work to have big enrolments. A high percentage of failures will not help attract students.

Griño, E. U. (1958). The formulation of a reliable instrument for measuring the effectiveness of a new teaching approach to the study of English in the first semester of college work (Unpublished Master’s thesis). Central Philippine University, Jaro, Iloilo City.