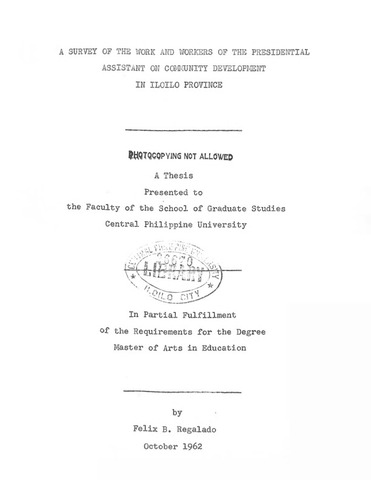 The Community Development education program as revealed in the studies made in the colonial governments of India, Puerto Rico, Jamaica, and other countries before World War II, has been found to be very effective in giving the people the opportunity and freedom of solving their own social and educational problems through community action. For this reason, the program continued with greater impetus after the war and was adopted by the United Nations Organization as a means of helping the peoples of the world to recover from the crippling aftermath of the war. In the Philippines, this Community Development education program began years before 1953, the year Ramon Magsaysay became president. During the American rule, the idea that the government should be the instrument for advancing the people's welfare resulted in the introduction of democratic and political institutions. The ensuing struggle for political independence stimulated the preparation for an independent nationhood, and the probing deeper into the basic, socio-economic problems by the enactment of special legislation. President Manuel L. Quezon’s "social justice program" was forced upon the leaders of the nation in anticipation of political independence in 1946. After the war, the Philippine Government busied itself in the herculean task of reconstruction. Born according to the pre-war time-table, the government of the Republic of the Philippines was faced with the responsibility of assisting the people to meet their problems and needs made more acute by the destruction and demoralization. The problems of the rural population which constitute the main bulk of the population loomed high in the minds of the Filipino leaders, although "emphasis on the rural problems did not follow solely from the logic of demography, for still there were, as there are at present, powerful forces against basic social and agrarian reforms." Among the factors that helped to focus attention upon rural life are: 1. A developing democratic orientation, partly related to the growth of the middle class. 2. Renewed political and agrarian unrest which passed under communist leadership. 3. Sympathetic urban and official attitudes, resulting in part from wartime evacuation into the hinterlands. 4. Socio-economic studies underlying planned reconstruction, development, and reforms. 5. Rural development projects of government and voluntary agencies. 6. Influence of comprehensive social action theories of foreign origin, introduced locally under the "rural reconstruction" and "community development ." 7. The impact of Magsaysay's campaign and leadership. Ramon Magsaysay is said to be an integral part of the barrio improvement movement because as a former congressman, guerilla leader, military governor, and Defense Secretary he learned much about the need of the barrio people. He had initiated the EDCOR. While it would be inaccurate to attribute to the Magsaysay administration alone the recognition of the rural program, he managed to save for himself the credit of becoming its most dynamic champion. Deeply touched by the drab and poverty-stricken scenes prevalent in the rural areas where about 80 per cent of the people live, he vigorously launched his epoch-making Community Development program, and created on January 6, 1956, the Presidential Assistant on Community Development (PACD), the functions of which are divided into the following categories: I. Projects Contributing to Increased Production II. Self-Help Improvement III. Education IV. Social Welfare Administration Community Development since then has become a dynamic force that is spreading over the countryside. Regional offices have been established in strategic centers of the country in order that the gospel of self-help on which the approach is founded will stimulate more people in community independence and responsibility resulting in more local leadership and economy. Education is a spiritual reevaluation of life, a search for the "good life," a philosophy at work. Taken in this light, the PACD is Adult Education in action which enables man to take a richer, more significant, and practical view of life, and teaches him how to live more abundantly. An article in the Manila Times Weekly Magazine dated November 20, 1958, reports the interesting facts about a school using people for textbooks and barrios for classrooms. This new phase in education was introduced on August 27, 1957, when a memorandum was signed between the University of the Philippines and the Office of the Presidential Assistant on Community Development creating a special school, the function of which is to find the strength and wealmesses of the Philippine Community Development Program and to propose corresponding measures for its betterment. Most of the students of this school are either professors of different social sciences, and other units of the University, or those who need field study upon which to base a master’s thesis or doctoral dissertation. It was hoped that this study might discover facts about the activities of the Community Development agencies such as the ones in the province of Iloilo, that in the analysis of their strength and weaknesses proper evaluation and recommendations may be made with the view to increasing their effectiveness; and that the government upon taking cognizance of the over-all picture of the activities of the Presidential Assistant on Community Development, may give continued and undivided support to promote a general socio-economic and educational revival in this country.

Regalado, F. B. (1962). A survey of the work and workers of the Presidential Assistant on Community Development in Iloilo Province (Unpublished Master’s thesis). Central Philippine University, Jaro, Iloilo City.