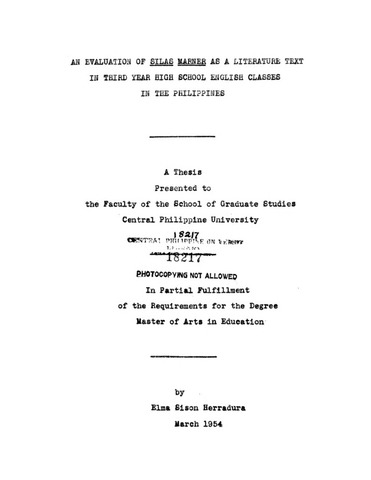 One writer in the field of the teaching of English said, "English is the most important and fascinating subject; it is also the hardest to teach." It may be presumed that he voiced the opinion of the American teachers of English. If so, one can understand why the Filipino teachers of English, to whom and to whose students English is a second language, would repeat the second part of the statement with some vehemence. They also heartily agree with the same writer that "Literature is the English teacher’s hardest problem." How the problem originated. The problem with which this study deals is an aspect of the "hardest problem". It began as a feeling of frustration and dissatisfaction which visited the writer on literature days when she was teaching third year English. Conferences with senior teachers whose help was sought and talks with contemporaries revealed that they too felt they were not making real progress in their literature classes because "students do not bother to read assigned lessons; some manage to get passing grades by last-minute reading, but are none the richer in literary experience. You cannot measure that, you know, so you cannot fail students on that count!" When the matter of motivated assignment and varied devices to make lessons attractive to students, was brought up, it was brushed aside with protestations like "You can motivate the diligent and alert ones, all right, especially students in A sections; but the others can be 'motivation-proof' or they cannot stay 'motivated'. Yes, you can hold students agape with heightened interest by a dramatic reading or reproduction of first portions, you can read yourself blue and hoarse, perspire from head to foot, and make a sight of yourself pretending you were Sohrab and Rustum at the same time, you can crawl on your knees like Eppie in a 'toal hole', but if you think many of your enthralled listeners will avidly pore over the portions you dramatize or continue from where you leave off, you have another guess coming! Some students do, yes, but these are the ones who would read the assignments, with or without all the trouble the teacher takes upon herself." Other teachers are more kind to students and concede that students do try their best to take care of their readings, but that they do not seem to profit much from these, as shown by their responses in class, because the materials given them are above their comprehension. "Our students cannot read orally effectively nor read silently intelligently. They cannot understand the simplest instructions, oral or written, until these are explained at least two times. They cannot spell nor write clearly. They continually complain that they cannot understand materials assigned. Why, we have not yet started on this year's work; we are still reviewing last year’s work!" This is the refrain, not only of the teachers of English, but also of teachers of other subjects. The latter sometimes vent their exasperation with the apparent indifference and slowness of students, especially with their poor comprehension and deplorable use of English, on the English teachers. "What are English teachers doing? Do they not teach students to read? Our students cannot express themselves in English." These are echoed by the disgruntled parents who usually recall the good old days when they could do this and that when they were only "this high". All these complaints and criticisms drove home the realization that the feeling of frustration which the writer had arose from a real problem. It is a problem of many phases and involves the abilities and attitudes of teachers and students and other things apart from them. No matter what can be said of the intellectual inadequacies and indifference or mental inertia of the general run of students, it cannot be denied that most of them go to school with the sincere intention of preparing themselves to be useful citizens of tomorrow If all the factors of the educational program are truly contributing to the learning situation, the "immature, indifferent, lazy, foolish" learner will surely do his part because certainly nobody stubbornly chooses to remain ignorant. All of the phases of the Philippine educational system need improvemeat and it is difficult to locate the chief source of the problems and inefficiences which fill teachers and school officials, as well as students and parents, with dissatisfaction. From honest remarks of students made during informal chats away from the classroom scene, the investigator gathered that students do not bother to read literature assignments carefully because there seems to be no use poring over them. They cannot understand much, even after word difficulties have been cleared in class. Literature cannot be really appreciated by hurried, haphazard perusal which is more "cramming: than "reading". The problem Can it be that a great deal of the ineffectiveness and many of the difficulties of the literature program lie in the use of literature materials which are not within the range of the students’ comprehension? Judging from the remarks quoted previously, teachers have a strong feeling that this is so. That this problem is no whimsical complaint of inadequately prepared teachers, who like the proverbial poor workmen, continually complain of their tools, is shown by the fact that at the 20-day seminar on the improvement of English instruction which was held at the Araulio High School, Manila, in the sum­ mer of 1953, two of the chief problems discussed were:1 (1) The literature materials from the first to the third year are rather difficult for the comprehension of the lower sections. (2) There is a general tendency for students to read the comics instead of the texts, such as Silas Marner and the home reading books. The problem of the suitability of literature materials is also the subject of many an article in Philippine educational journals as well as in the public press.