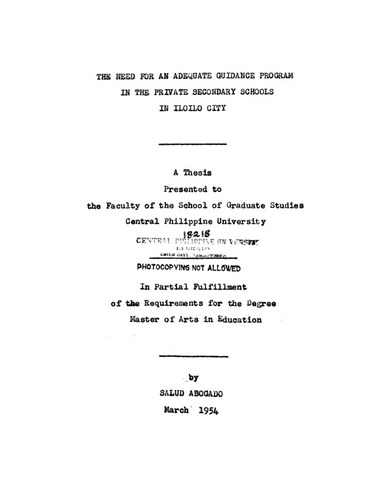 The close of the last war has brought a great influx of students with retarded education. This situation plus all the economic and social changes of the post-war period have brought about numerous and perplexing problems which before were not apparent. These problems are now increasing into such alarming proportions that school administrators, teachers, and parents are desperately seeking for a solution, to the end that youth may grow up to be happy and useful members of their homes and communities. The schools must take a dominant role in this search and assume the responsibility for giving citizenship training to the students. This training, which may be called a guidance program, includes guidance in the educational, vocational, social-civic, moral, and recreational aspects of life. These various aspects are not to be segregated and treated independently of each other, but rather should operate as an integrated whole. The aim of educational guidance is the intelligent direction of students in the choice of curricula and of courses within the curricula and in their choice of other institutions of learning if education is to be continued beyond the student’s present school. The aim of vocational guidance is to assist the individual student to choose an occupation, prepare for it, enter upon it, and progress in it. It is concerned primarily with helping individuals make decisions and choices involved in planning a future and building a career, making decision, and making choices necessary in effecting satisfactory vocational adjustments. The objectives of social-civic guidance involve all those activities of the schools which lead students to become cooperative members of the school society. They aim further to direct pupils so that the training will carry over into social life outside the school and to prepare the students to perform properly their duties in society and enjoy the privileges of adult citizenship. The moral aspect of guidance relates to the moral and spiritual side of life. It trains the students in matters of spiritual welfare. It sets the standards for righteousness, truthfulness, and honesty. The recreational aspect of guidance aims to provide wholesome activities in which the students may whole-heartedly engage. Games, sports, special courses in music, art, drama, playground activities, directed reading and the like are included in this description. Those worthwhile activities should challenge the students' powers, abilities, and interests, and lead them to form wholesome tastes and attitudes. The writer's experience as a classroom teacher for a number of years revealed to her the great need for an adequate guidance program for the private secondary schools in the City of Iloilo. Like all classroom teachers, she met various problems among the students which affected their studies in school. Truancy, frequent absences, and lack of Interest in study were found to be the results of many factors, primarily social and economic. Finally came the realization that high school students need a well-developed program of guidance, especially at present because their problems are related not only to their schools but also to the community. In the City of Iloilo, a notable number of police cases were reported as having been committed by adolescents. It was found out that some of these young boys who wore leading a life of crime are sons or brothers of prominent and well-to-do citizens. Therefore poverty did not appear to be the cause of this problem. Life in the city of Iloilo changed after the last war. The increased population has brought new problems of housing and of recreation. Young boys spend their time in unwholesome recreations like gambling. Some of the private secondary schools are located in the crowded section of the city, near movie theaters and bars. Social and economic changes which culminated in the Huk movement in Panay were felt also in the city of Iloilo. Young boys are easy prey to the lure of adventure and exciting life of the lawless citizens of the Island of Panay. It is a generally accepted fact that there has been a moral degradation of youth as a result of the war. Young boys have become less obedient, and less respectful. They have become careless and easy-going. Young students are not as earnest in their studies as students were before the war. In view of the above, it is felt that there is a need for an adequate guidance program for young high school students for their own sakes, and for the welfare of the community in general. The purpose of this study then was to find out whether the private secondary schools in Iloilo City have adequate guidance programs to help and direct students in their pursuit of knowledge and to enable them to make the most of the time, efforts, and money they spend in school and to recommend a guidance program better organized to help the students realize the ultimate objectives of education.