A study of the community schools in Miagao: Objectives, program, results 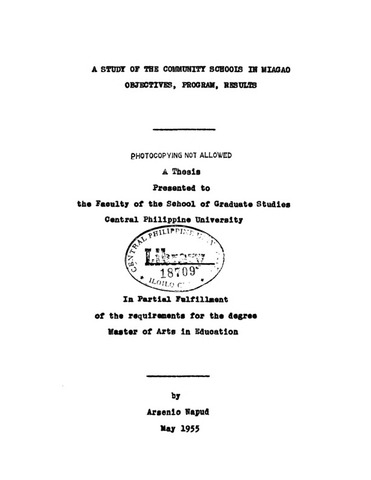 Since 1949 when the Bureau of Public Schools embarked on an educational program to improve the living conditions of the people, especially those living in the rural districts, the public schools of Miagao have silently undergone changes in the aims and concepts of education. The purposes of the schools were no longer to be limited to the transmission of the cultural heritage of the race to the young generation, but these purposes and goals, as well as the school curricula, were constantly to be geared to the changing needs and problems of community living. The new method of approach was based upon the concept that the schools in a democratic society should be community-centered or life-centered rather than book-centered or child-centered, and that the curricular offerings of the school should be kept alive to meet the societal problems. In the past, the school emphasized the education of the child through classroom procedures and confined teaching within the four walls of the schoolroom, notwithstanding the realities of life outside the school. In spite of centering the instruction on the child in order to equip him with the fundamentals of learning so that he could adjust himself to his environment, this education did not change the environment itself. Many educators and social observers noted that changes took place in the urban areas after fifty years of education while the rural communities remained in status quo. Because of these observations and findings, the so-called community schools were born. In the light of the new educational trends in community education, the researcher felt it was important to make a study of the community schools being developed in the municipality of Miagao for the last five years. The study used the normative survey technique of the community schools in operation with due share of attention to the objectives, curricular programs and achievements. The statement of the problem The purposes of this study were four-fold, to wit: (1) to clarify the philosophical concepts behind the community schools in Miagao; (2) to study the features and patterns of the community schools both on the town and barrio levels; (3) to select and evaluate the various principles, approaches, and techniques applied to community improvements and education; (4) to determine to what extent the community schools had influenced the improvement of living of the people in the poblacion and in the barrios. In general, this study was an attempt to discover the ways of interaction between the school and the community with the end in view to making certain recommendations so that both the child and the adult might more wisely use their natural resources.