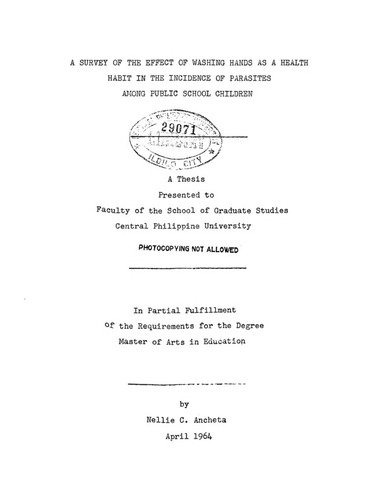 The human population is infected with parasites: ectoparasites and endoparasites. This relationship has always existed at the expense of man. Consequently, human potentialities have been wasted, segments of the human population have been constantly decimated by these small, pathogenic organisms and much of the sufferings, disease and death the world over is caused by them. Ascaris, for example, causes abdominal pain, accompanied by vomiting, diarrhea, and mild increase in temperature. The worms produce a substance which interferes with protein digestion. The larvae of the worms travel through the blood to the heart and lungs. Heavy infection may cause haemorrhage of the lungs, severe pneumonia, accompanied by fever, anemia, and leucocytosis. They may even migrate to the bile duct, pancreatic duct, liver, urogenital organs, spinal cord, and cause many complications. They may get out of the ears, eyes, nose, and mouth. Hookworm enters the human body through the skin and causes ground itch and water sore. This is characterized by itching, inflamation, and development of sores. The hookworm larvae travel through the blood, reach the lungs and cause pneumonia and other pulmonary infection. They reduce haemoglobin content of the blood which in turn result to general indisposition, flabbiness of muscles, reduced respiration, dull eyes and chronic fever. Children infected with hookworm usually become physically and mentally retarded and puberty is generally delayed. Mental retardation results in stupidity and backwardness in school. With the advent of modern anthelmentic medicine, man has gradually come to control parasite infestation. Individual well-being has come within the reach of everyone. The succeeding generations are taller, bigger, and heavier than their parents. In spite of this medical advance using these antiparasite poisons, the eradication of the parasites is far from complete. It has been noted that internal parasitism is more prevalent in the tropics than in the temperate and colder regions. Cases of parasitism in Europe and United States are too few to cause alarm. This may be due to a better way of life. The emphasis in these countries in combating the parasites of human beings has been both the preventive as well as active control. This new approach to the problem of internal parasitism has led to an increase in research directed toward better environmental living conditions, health habits, and intensive health education. Most of the internal parasites, especially the intestinal worms, spend a part of their life outside their host. They undergo embryonation and larval formation in the outside environment after which they reinfect their host. This reinfection is always through definite portals of entry, which are the mouth, nostrils, and skin. On September 1959-March 1960, Cabrera and others4 made a survey of the prevalence of Enterobius vermicularis in different districts of Manila using various public, private, charity and expensive schools as sample population. The study revealed that among the lower income groups, the prevalence was 55.28 per cent, while among the higher income families, the prevalence was 29.8 per cent. The fingertips were examined for the presence of eggs and of the 226 cases, 12.39 per cent showed presence of eggs with higher percentage among female than among male children. Piperazine citrate was found to be the best cure for these pinworms but reinfection immediately followed within a few weeks. The hands are so far the best agent for the re-entry of the parasites to the body through the mouth. If this agent of transmission was checked, the prevalence of parasitic infestation will also be reduced among human beings. Statement of the problem. This present study was an attempt to show the effects of handwashing as a preventive measure against parasite infestation and prevalence among elementary school children. Two aspects of the problem were devised in which in one group only handwashing was to be practised and in another group handwashing was supplemented by a deworming process. This research hopes to answer the following questions: (a) Can handwashing with soap control parasitic infection? (b) Is handwashing with soap supplemented by the deworming process just as effective as handwashing with soap alone in preventing parasitic infection? (c) Can handwashing with soap as a practice influence the formation of other health habits?

Ancheta, N. C. (1964). A survey of the effect of washing hands as a health habit in the incidence of parasites among public school children (Unpublished Master’s thesis). Central Philippine University, Jaro, Iloilo City.