Group counseling as an approach to family planning promotion and dropout reduction, with focus on no-scalpel vasectomy: An experimental trial and process documentation study 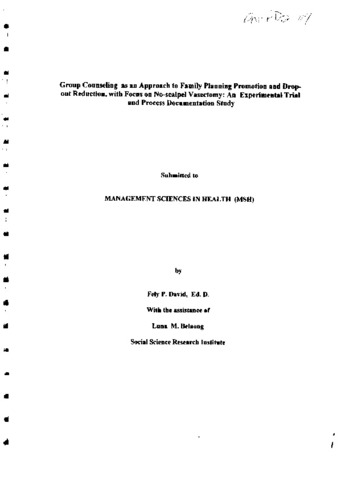 The Social Acceptance Project-Family Planning (TSAP-FP) stresses that women, men, youth, couples and families, the core of the entire approach are influenced by the people that surround them: community leaders; health care providers including community health workers; family; friends and neighbors; and local churches. With the assumption that the advocacy and social mobilization activities of the project are directed at key advocates believed to be influential in disseminating positive family planning (FP) message. These key advocates include local policy makers and decision makers, health and labor associations, NGOs, advocacy networks. community organizations. people's organizations, local media and faith-based groups. Currently, the one-on-one counseling is still the most commonly used approach in promoting family planning in the country today. One problem of this approach that has been identified is the imbalance in position between the counselor and the counselee. The counselor, who is usually more informed and confident than the counselee, tend to be viewed more as a lecturer, rather than a counselor. and this is believed to hinder open exchange and prevents the counselee from opening up. A recent TSAP-FP formative study revealed that men and women can be quite open about sensitive topics, like family planning. in a group setting. The data suggest that a group situation improves the balance of power between the counselor and the counselee(s). The Intervention Project as Designed The pilot project was designed to convene couples in project sites identified in Negros Occidental, so that they can make decisions together. The couples. who are expected to be homogenous in composition would represent: 1) new acceptors, those who were not using any FP method or those who have been on temporary methods for less than six months); 2) potential acceptors; who want to space their children but are not using any FP method, and 3) those who no longer desire any children, but are not using contraceptives or are still on temporary methods. Research shows that many FP users drop out within one year of trial of a particular method because they are either not satisfied with it or they are experiencing side effects. It is assumed, however, that when they are encouraged to adopt a more effective method and one which has no or minimal side effects. they may still be motivated to adopt the more effective method. Those who want to space their children but are not using FP and those who do not want any more children but are not practicing family planning could be encouraged to opt for either a temporary modem method or a permanent one. For these two groups. no-scalpel vasectomy (NSV) for males could be made available in a timely manner through the Matching Grants Program of MSH. Twelve couples were targeted to attend every group session and four sessions were scheduled to be conducted in each experimental area. Two experimental areas were to be selected as sites for the group counseling interventions and two sites similar in size and urban/rural characteristics as the experimental areas were to be selected as control. In the control sites, the usual one on one counseling approach would be used. Participants were to be recruited from the Community-Based Management Information systems (CB-MIS) in the MGP-MSH areas. Group counseling would be introduced in the experimental area to motivate potential FP acceptors and non-FP users who want to space or limit their children, to practice family planning. especially noscalpel vasectomy. Trained nurses, midwives. with the assistance ofBarangay Health Workers (BHWs) would be trained to facilitate the group counseling sessions. Trained doctors and nurses were to be tapped to provide technical information on FP methods as required. The group setting was assumed to encourage participants to speak out and share their views and perceptions about family planning and this sharing may encourage other participants to also share their own concerns. As participants interact. argue. agree or even disagree about certain issues, they may encourage each other to practice particular FP method. It is expected that "group think" could influence decisions.