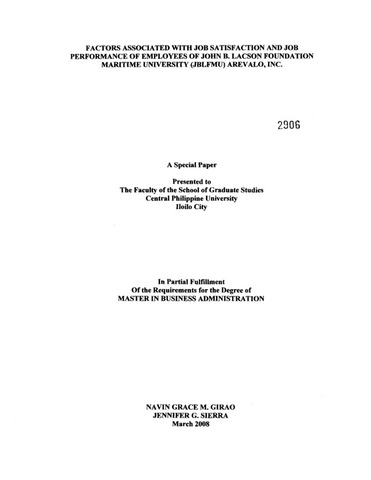 A study on the factors associated with job satisfaction and job performance of employees of John B. Lacson Foundation Maritime University, Arevalo, Inc. was done using a one-shot survey design. The respondents of the study were 104 employees of John B. Lacson Foundation Maritime University, Arevalo, Inc. The research instrument was a questionnaire patterned from Fely Dario Armadillo,(March 2002) and secondary data on job performance was taken from Staff Performance Evaluation Sheet of the JBLFMU, Arevalo, Inc. Personnel Office. The statistical tools used were the frequency count, the percentage, mean Chi-square test, Gamma coefficient and Pearson r. The level of significance used was .05 alpha. The findings disclosed that the employees were very satisfied with their work in the university in almost all areas evaluated with the highest mean noted in the area of training and career development and lowest in working conditions. The majority of the personnel had very satisfactory job performance. There were more older, female, single, postgraduate, high income, and teaching employees who were very satisfied with their jobs. The majority of the younger, female, single, college graduate, high-income employees, and administrators had very satisfactory job performance. The results did not support either the null hypothesis that there is no significant association between monthly income and job satisfaction or the one which states no significant association between monthly income and classification of work and job performance. There was a weak, negative and no significant relationship between job satisfaction and job performance. The researchers concluded that among the identified factors only monthly income and classification of work were identified to influence job satisfaction and job performance. Thus, the researchers suggest that (1) the administrator look into the physical work environment specifically, the office layout such as office space, distance, ventilation, etc. with work convenience of utmost priority because this area got the lowest mean score among the various areas evaluated for job satisfaction; (2) the management of the university should always be aware of salary increases if reasonable to keep the satisfaction of their employees always at the highest level; (3) the administration of JBLFMU-Arevalo, Inc., should look at the remunerations and incentives provided to their teachers and try to identify areas which could further enhance their job performance since they this group had the lowest proportion with very satisfactory job performance; (4) enhancement of promotion system in the university might improve the job performance of the personnel particularly the teachers; and (5) a similar study is suggested for the employees of other campuses of JBLFMU-Arevalo, Inc., for comparison reasons.