The municipal school boards in the province of Iloilo: Status, problems and prospects 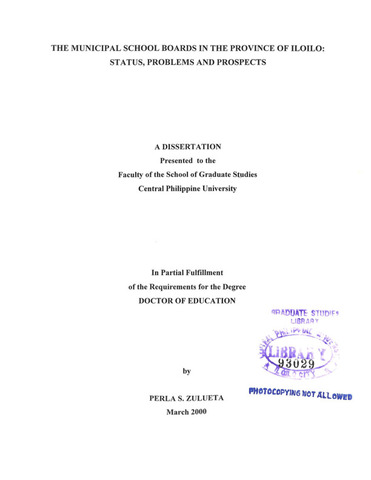 This study was conducted to assess the performance of municipal school boards in the province of Iloilo. It aimed to determine the influence, if any, of certain school board characteristics on performance and of the characteristics of members on their performance. The respondents of the study were the Local School Boards (LSBs) and the members of these school boards. Out of the 42 LSBs (one per municipality), 30 were chosen using the stratified random sampling technique: eight came from 3rd class municipalities, 21 from 4th class and 13 from 5th class. All the members of the LSBs in the 30 towns totals to 240. Out of these, 174 served as respondents of the study. Respondents were made to answer a self-administered questionnaire. Frequency distributions, comparison of proportions, chi- square and gamma tests for association were the main statistical tools used in data analysis. The respondents were mostly men, middle-aged, married and bachelor’s degree holders. The majority of the members of the school boards had served for less than three years. Most of them had high awareness of school board functions, of sectors represented and of sources of funds. Most of the school board studied belong to 4th class LGUs and most had members having the same political affiliation as the mayor. Among the three non-financial functions of the board, the giving of advice on appointment of school officials was the most frequently exercised. Of all the classes of expenditures, the category of Maintenance and Other Operating Expenses (MOOE) was allotted the biggest share. Most school boards met only once or twice a year and annual budgets were most often approved in the first quarter of the current fiscal year. There were school boards whose composition exceeded the mandated membership; yet, there were also others where mandated sectors were not represented and some had representatives who did not truly represent the sectors. In terms of board performance, associations were found between LGU class and board performance rating, between punctuality of budget passage and LGU class, between regularity of board meetings and LGU class, between board rating and regularity of board meeting, and between board rating and punctuality of passage of budgets. In terms of individual performance, most of the respondents were average in participation and majority gave themselves average performance rating although most of them were given high ratings by others. Attendance in board meetings significantly increased with high educational attainment. Respondents who gave themselves high ratings were significantly more among those who scored high in attendance and also among those whose participation was high. The ratings given by others significantly increased with a member’s greater participation. Board performance was found to have negligible relationship with individual performance. Conclusions. The status of the school boards studied as to their performance as a group proved to be less than what ought to be expected. The non-financial functions are hardly exercised and on the financial aspect, there was too much emphasis on sports. Records however show that, except for a town or two, most of the towns have not produced nationally renowned athletes nor even have the reputation of being sports-crazy or just sports-minded despite the big amount of funds poured into sports and sports-related activities. These findings are similar to the critical issues in school financing which Berke calls “inadequacy and inequity.” What makes such situations a cause for alarm is that aside from funds being insufficient, there appears to be no criteria used as bases to allocate resources in an effective and equitable manner. As far as political affiliation is concerned, the situation found by the study supports the principle of solidarity written about by Hollnsteiner in the context of the very big majority of LSBs on the mayor’s side. LGU class was found to be associated with the frequency of board meetings. Board rating was found to be associated with regularity of meetings, punctuality of budget passage and LGU class. Board performance rating was found to be associated with individual performance. Members who performed well caused their LSBs to perform well, as well. Recommendations. From the major findings of the study and conclusions drawn, improving the quality of the membership is the most imperative in order to have members who would understand their functions and would exercise these as mandated. Better understanding of what is expected of them would hopefully do away with conflicts, promote harmony in the board and create more participative decision-making that would result to more productive programs. Constant evaluation of school board performance should also be done. An objective assessment and constructive criticism would show how well their boards perform and how efficiently are resources utilized. By and large, the concept behind the creation of school boards is laudable. There is nothing wrong with it. If there are weaknesses observed and perceived, it is only because some of its members fail to perform as expected. The focus should therefore be on the right choices of representatives who can truly and ably represent the sectors. To do so would improve the quality of the membership of the local school boards and consequently come up with a performance that would economically rationalize the use of public funds and efficiently and effectively discharge its functions. Only by then would prospects look brighter than what they are now.

Doctor of Education major in Administration and Supervision