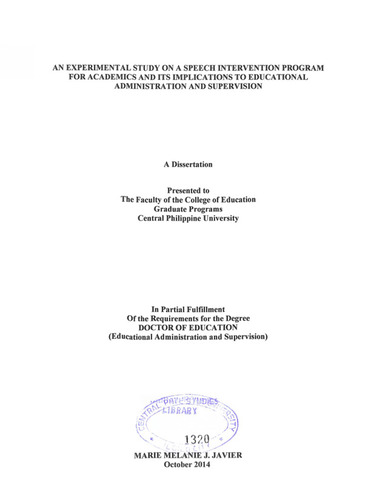 This two-in-one study evaluated the effect of a Speech Intervention Program For Academics ( SIPFA) among the faculty of Central Philippine University in the first semester of school year 2014-2015. To accomplish this, a needs assessment survey of the CPU faculty was done in the pre-experiment stage. It sought to profile the faculty in terms of six demographic characteristics, their oral communications skills and need levels, and their preferences for a training program in this area. It also sought to determine any significant relationship between the demographics and the willingness to participate and their speech need levels. Frequency distribution was done to generate the demographic profile while Chi-square was used to determine significant relationships. The results showed that the 87.2% of the entire CPU faculty who participated in the survey were largely females, married, middle aged, with master’s degrees, had Assistant Professor ranks and earned a modest basic salary of 15,000.00 to 19,999.00 a month. They rated their oral communications skills to be generally “Very Good” and their need skills to be generally “High”. They were willing to participate in a speech development program for two days and generally left the subject areas for training to the organizers. Among the variables, age, academic rank and salary were significantly related to the willingness to participate in the speech program, but none with the need levels. The results of the needs assessment survey assisted in the selection of participants for the experiment. Those with moderate and high speech needs were initially selected. Two other variables, educational degree and pre test scores were used to twin the participants to determine the 25 participants of the Experimental Group and the 25 participants of the Control Groups. The Experimental Group was subjected to cognitive, affective and psychomotor training using the SIPFA Teaching Module for two full days but with a 5- day gap between phases. The Control Group was left alone. Score comparisons between the two groups and within a group were done through the t test. The results showed that at the pre intervention stage, there was no significant difference in the oral communication skills of the two groups, however, at the post intervention stage there was a significant difference between the two groups. The difference in the change of oral communication skills level was significant in favor of the Experimental Group. Therefore, the SIPFA is an effective means to bring about oral communication skills improvement among the CPU faculty. This finding provides rational data to CPU administration for addressing its staff development function in the university especially in soft skills enhancement.