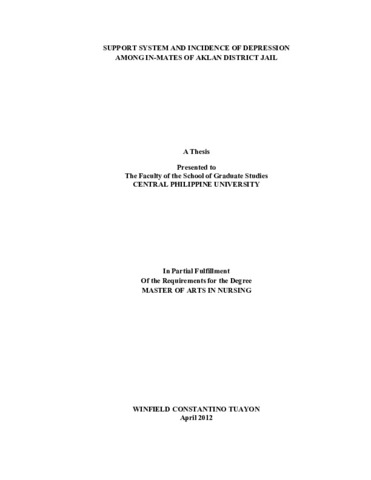 No one is immune from brief depressive reactions. Vulnerable populations such as the incarcerated individuals are highly susceptible to the episodes of depression. The harsh reality of imprisonment can have a negative impact on inmates, influencing their capacity to adapt to their new environment. Adjustment to prison life is a process that can be affected by a variety of issues. The study was designed to determine the effect of the support system and the incidence of depressions among In-mates of Aklan District Jail, Nalook Kalibo Aklan. It further determine, through case study, the effect of support system to the incidence of Depression among in-mates by assessing four (4) in-mates, two (2) in-mates with support system and manifests depression and another two (2) in- mates without support system and has manifested depression. The subjects of this study were 130 inmates of Aklan Distirict Jail, 115 male and 15 female in-mates. The study utilized a researcher-made questionnaire and employed Frequency distribution, Percentage and Cramer’s V Coefficient (V) as statistical tools for data analysis and interpretation. Results showed slight relationship between availability of support system and incidence of depression, which implies that the availability of support system while inside the prison the less likely to develop depression. The results further showed that sex and the length of time in jail slightly relates with the incidence of depression among the respondents. To further support the study, a qualitative study through a case study was conducted where purposive selection of respondents was employed in the case study were four in-mates were interviewed, a male and a female with the available support system but manifests the signs and symptoms of depression and a male and a female without available support system and presents the signs and symptoms of depression. The data were sorted, explored, dimensionalized, categorized and come up into themes which includes, Life experiences before incarceration, Availability of Support system upon incarceration and Depression experienced inside the jail such as feelings of unhappiness, inability to experience pleasure, loss of appetite, problems with sleeping, feelings of worthlessness and suicidal ideation.. The results of the quantitative study were further supported by the selected subjects of the case study. Indeed despite of the diversity of personal characteristics, the availability or unavailability of support system, the incidence of depression is still possible. Though the availability of support system contributes to the incidence of depression based on the story of the inmates however the length of time while in jail contributes more to the feelings of sadness among these inmates. The reality of being incarcerated, the tepid daily activities, the loss of freedom, delayed law proceedings, longing for the outside world and family mostly causes these inmates to feel the fierce of sadness and hopelessness while in jail. Rehabilitation programs and quality improvement efforts should address not only to the inmates but to the family, spouse and children’s welfare. Accreditation policies should also include the promotion of the rights of the female inmates and standard protocols considering their emotional and mental health.