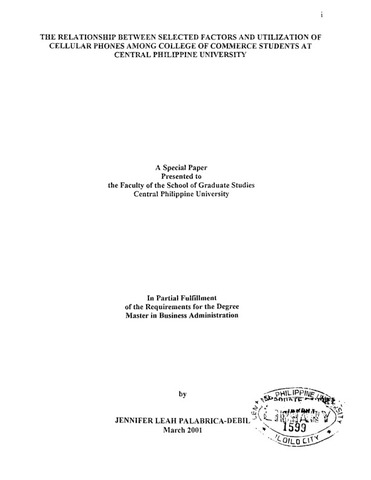 According to Philip Kotler, before a person decides to buy, there are five roles played by different people which lead to the buying decision. These roles are the initiator, influencer, decider, buyer and user. The initiator is the one who first suggest of the idea of buying a particular product or service. The next is the influencer of the person whose advice carry some weight in making a final buying decision. The decider is the person who ultimately makes a buying decision or any part of it and the buyer is the one who makes the actual purchase. Lastly, the user is the person who consumes or uses the product or service. The decision to buy ultimately leads to the usage or consumption of the product although both may not necessarily come from the same person. For a need to be satisfied it has to pass through a process. The decider and the buyer are two of the determining factors crucial in the utilization of the product. The final push towards actual buying is the financial capacity as well as the willingness to buy. The satisfaction of the need or want is dependent on the purchasing power of the decision maker and it follows that the more the decider is financially able the easier it is for him to satisfy the need otherwise, the difficulty of fulfilling the need or desire becomes greater. A person’s occupation as well as his purchasing power greatly affect his consumption or utilization of goods and services. Students are perceived to be financially dependent on others most especially their parents for support. Exceptions are those students who work to support themselves. But even these people are perceived to have limited resources. Students have limited buying capacity despite being influenced by many external factors. What is observed, however, is that students maintain a lifestyle that is normally beyond their means. What seemed to be luxury in the past are now ordinary needs of students despite the increasingly difficult times. Cellular or mobile phones are usually perceived to be for people who have businesses or for people whose time mean money. To speed up work and cut waiting time, cellular phones are a must for these people. Rates are so expensive such that calls are limited to the most important ones. However, because of the changing times and the bombardment of advertisements, attraction to use mobile phones seem to grow stronger by the day. What was once a luxury for students now become a basic necessity. Such discrepancy between what is perceived and what is reality has led the researcher to conduct this study to be able to thoroughly understand the relationship between selected factors influencing students to utilize and their utilization of cellular phones. It is expected that through this study the researcher will be able to show the utilization behavior of students and the rationale behind such utilization. Objectives of the Study In general, this study was conducted to determine the relationship between selected factors and utilization of cellular phones among students at the Central Philippine University, College of Commerce. Moreover, the study also determined the degree of association between these selected factors and the students’ utilization of cellular phones. This study specifically aimed to: 1. describe the students according to their age, gender, residence and family income; 2. identify the factors of motivation that are significantly associated with the students’ utilization; 3. determine the different forms of promotions that are significantly associated with the students’ utilization; 4. determine the process of utilization of cellular phones among the students; 5. determine if there is a relationship between age, gender, residence and family income to the selected factors of motivation; 6. determine if there is any relationship between age, gender, residence and family income to the selected forms of promotions; 7. determine if age, gender, residence and family income is significantly related to utilization of cellular phones; 8. determine if there is a relationship between the selected factors of motivation and utilization of cellular phones; 9. determine if there is a relationship between the selected forms of promotion and utilization of cellular phones.