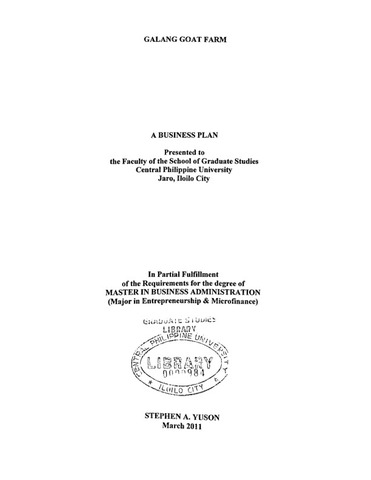 The name of the business is Galang Goat Farm located at Brgy. Salngan-Galang, Oton, Iloilo in a rented land, 12 kilometers south of Iloilo City. The optimum potential of goat as one of the main sources of meat has not been fully tapped in the Philippines. A goat is popularly known as the poor man’s cow because the old folks can not afford to buy cow’s meat. Aside from being cheap, goat’s meat is more digestible compared to cow’s meat. Goat raising is undertaken commonly by small farmers or backyard raisers. A farmer raises an average of one to two head goats. Only a handful of commercial-scale goat farms can be found in the province. This study is conducted to determine the viability of the proposed goat farm business in the town of Oton. This study was also conducted to determine the appropriate strategies that the business may be able to employ in order to make it more efficient and effective. The Galang Goat Farm will produced a crossbreeding of anglo nubian race with the native goat of the province. This will upgrade the usual native goat which can produced meaty goat than the usual native goat. Such will also be the source of the red meat that is low cholesterol which is beneficial to the customers who are health conscious. The proposed business will be a sole proprietorship business to be managed by the proponent. There will only be three (3) employees where only the caretaker is a regular employee and two (2) others namely the bookkeeper and veterinarian are part- time employees who will be on retainer’s fee arrangement. Everyone will be given their appropriate duties and responsibilities such as the time to render their services (e.g. normal hours of work and their salary package). The production of a goat farm will be based on the guidelines that have been set and will be followed in the operation through the 5 years. As a result of this study and the strategies that have been adopted, the following are expected: By 2016 the Galang Goat Farm can sell a maximum of 70 heads of goats, with 93 goats in the inventory. The Galang goat farm will become the market leader in terms of quality of upgraded goat produced in the Province of Iloilo. The Galang Goat Farm intends and envisions to produce a very distinctive quality of goat and to become the leading producer of high percentage of anglo-nubian goat in the Province of Iloilo. The Galang Goat Farm by 2016 will make sure to have a quality management system; positive cash flows; effective goat farm management, and a sales marketing system. The Financing strategy to be applied will be the internally sourced funds from earnings from the sales of goats and services of the buck. Galang Goat Farm does not intend to avail of a credit facility or loan from the bank. As shown in the projected statement of comprehensive income, it shows that the projection is increasing from the beginning up to 2016. The projected results of operations will show the following: 1. Net income after tax of P80,176.23 on the second year to P161,931.42 in the fifth year or on the average of P97,585.36. 2. Assets (Net of depreciation) from the first year of P359,400.19 to P 862,122.30 in the fifth year. 3. Equity or networks of the owners from initial investment of P361,136.25 during the start of the business will increase to P 847,326.84. 4. The payback period is 3 years and 8 months while the discounted payback period is 4 years and 3 months. The market of the goat industry is expected and predicted to be of the same volume and level over the next period of time with aggressive promotion of the goat industry. The Galang Gaot Farm expects and assumes that by 2016 demand for goat meat in the entire province of Iloilo will be at least 70 heads. The Galang goat farm intends also to target other provinces where there is scarcity of goat meat. The target customers includes the supermarkets, wet markets, and individuals. The competitors of Galang Goat Farm are Espanola Dairy Goat Farm and backyard raisers. The competitors are also the sellers who are the same as those of the Galang Goat Farm. As far as target market concerned, visibly present competitors in the wet markets and most of the individual customers prefer to buy directly from the farm. The Galang Goat Farm has carefully prepared a financial projection in order to achieve the expected sales and profits for the next five years. * Anglo Nubian - basically a tropical breed that was successfully adapted and raised in the western countries; distinguish features are dropping, pendulous ears and a high-bridged nose