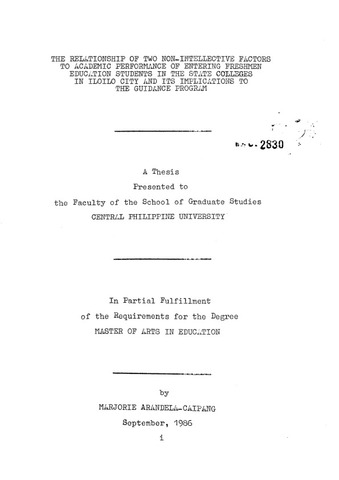 High scholastic achievement is one of the most important goals of the educational process. Parents as well as teachers almost always expect that their children or students should perform academically to the best of their abilities. Most parents and teachers think that scholastic achievement is the result of inherited tendencies. If a student fails, he is labelled as "below average" mentally. In some other instances, a student who has been accepted in school on the basis of a very strong potential, as in the case of passing an entrance examination, may sometimes end up with academic failures. However, there are some instances where some students who are of "average" intelligence perform better in school than others with "above average" intellectual abilities. Why do these students perform in school differently than expected? Is academic success or failure solely dependent on the student's inherent mental ability? Or are there variables within the environmental set-up that likewise affect academic success? Academic achievement, as proven by Munarriz, Distor, de la Cruz, and Hernandez among others seems to be affected by non-intellective factors, as well as by intellective ones. Among the non-intellective factors considered to have an effect on academic achievement are the values that the students have as well as their respective interests, problems, personal traits, personal backgrounds, academic backgrounds, social adjustments, peer group influences, and socio-economic backgrounds. Any attempt to investigate all the non-intellective factors that are likely to influence academic achievement will be complicated. Hence this study will attempt to discover the influence of the socio-economic background of the students and their interpersonal values on their academic performance. The problem Statement of the Problem The objective of this study is to determine the socio-economic characteristics and the interpersonal values of the first year teacher-education students in the state colleges in Iloilo City, and the relation of these two factors to their academic performance, as background informa- tion for putting up a guidance program to be proposed for a school like the Western Visayas College of Science end Technology. Answers to the following questions were sought: 1. Is there relationship between socio-economic status and academic performance of the respondents when the NCEE and Interpersonal values are controlled? 2. Is there relationship between interpersonal values taken together (as well as the specific values like Support, Conformity, Benevolence, Recognition, Independence, and Leadership treated separately) and academic performance of the respondents, when the NCEE and socio-economic status are controlled? 3. Is there relationship between the NCEE rating and the academic performance, when the socio-economic states and the interpersonal values are controlled?

Caipang, M. A. (1986). The relationship of two non-intellective factors to academic performance of entering freshmen education students in the state colleges in Iloilo City and its implications to the guidance program (Unpublished Master’s thesis). Central Philippine University, Jaro, Iloilo City.