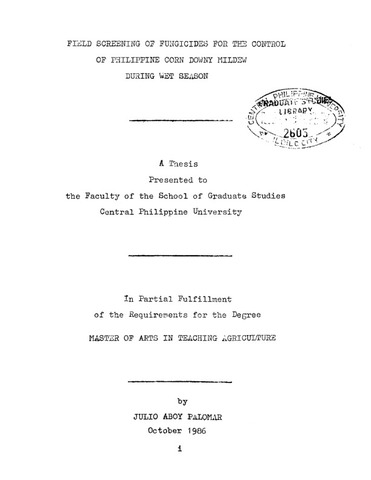 Statement of the Problem This study covered the field screening of fungicides for the control of Philippine corn downy mildew, Peronoscleroepora philippinensis (Weston) Shaw during wet season under Negros Occidental Agricultural College (NOAC) conditions. Object of the Study Objects of the research were; 1. to determine which of the fungicides is most effective in controlling downy mildew of corn; 2. to determine which of the corn varieties will produce more under the influence of the disease; 3. to determine the best fungicides and variety combination that will result in maximum economic yield; 4. to find out the interaction effect between fungicides and varieties used; 5. to find out the regression and correlation effect between grain yield and downy mildew infection; 6. to determine the relationship of environmental conditions (temperature, relative humidity and rainfall) with infection; and 7. to determine the estimated per hectare cost and return analyses by corn variety and fungicide used.

Master of Arts in Teaching Agriculture