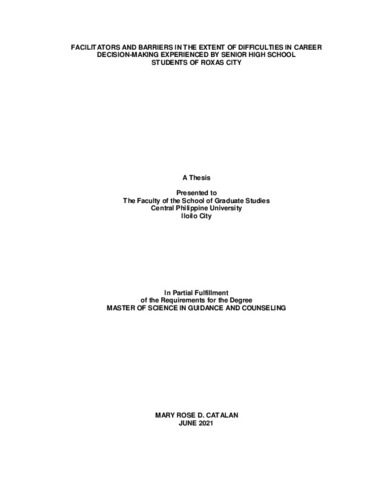 This descriptive-relational study aimed to explore the career decision-making experience of senior high school students, and the relationship of the variables perceived as facilitators or barriers to the extent of difficulties they experienced in the process. A 3-part questionnaire, composed of a validated researcher-made questionnaire and the standard Career Decision Making Difficulties Questionnaire (CDDQ), was administered to a sample (n=345) of Grade 11 and Grade 12 students from one private and one public secondary school in Roxas City during the school-year 2019-2020. Findings revealed that senior high school students in Roxas City, Capiz, were mostly female, and have parents, who are college educated. They were exposed to career-related opportunities in school, and at home, having attended the high school orientation program, availed guidance and counseling services, and had a primary influencer of career choice. The study found that career decision-making difficulties, in terms of (lack of) readiness, information inadequacy and information inconsistency, were prevalent among senior high school students which indicates their need for focused intervention such as career counseling and professional guidance. Among the variables included in the study, only sex was found to be significantly related to the extent of career decision-making difficulty in terms of readiness. Results suggest that the extent of difficulty in career decision-making, whether negligible, moderate or salient, is an individual experience for every senior high school student who face the developmental task of making career decisions.